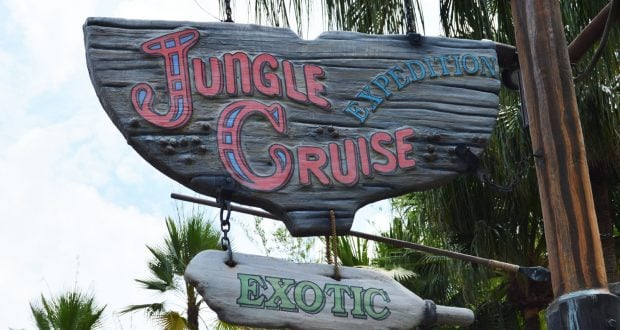 8 Facts And Secrets About Jungle Cruise in the Magic Kingdom

One of the most beloved and classic attractions in all of Walt Disney World can be found in the heart of the Magic Kingdom’s Adventureland. The world famous Jungle Cruise invites guests on an adventure like no other as they set sail down some of the most exotic rivers in the world. Guests who are brave enough for the trip find themselves on an expedition hosted by a British exploratory company from the 1930s and 1940s. Once onboard one of the aptly named boats, guests set sail for exotic locations with a skipper at the helm who is sure to tell corny joke after joke leaving guests hysterical throughout their journey. The Jungle Cruise is filled with wonderful props, details, scenery, and sights, and guests who enjoy the attraction once always end up coming back for more. In addition to the beautiful scenes and hilarious skippers, the Jungle Cruise is home to plenty of details which feature facts and secrets that guests love finding. From jokes and Hidden Mickeys to homages and odd phrases, there are plenty of interesting things to discover on the attraction. Here are eight facts and secrets for guests to find on the Magic Kingdom’s Jungle Cruise!

Since the Jungle Cruise takes guests to some of the most remote and exotic locations in the world, the plant life and greenery on the attraction need to reflect that feel. When the attraction was being built, Disney horticulturist Bill Evans was assigned the task of bringing the exotic to life in Central Florida. Evans wildly succeeded, allowing guests to truly feel transported to different locations around the world without ever leaving Adventureland. When exiting the Jungle Cruise, guests can spot a shipping crate which pays tribute to the wonderful work that Evans did. The crate reads: “Evans Exotic Plant Exporters 1313 Harbor Blvd Anaheim, CA 71755.” While the reference to Evans is clear, the crate also features the address of Disneyland in California and the date July 17, 1955 which was Disneyland’s opening day.

A somewhat eerie portion of the Jungle Cruise brings guests into an exotic and crumbling temple somewhere deep in the heart of Asia. The temple features dim lighting, exotic animals like monkeys and tigers, and a Hidden Minnie! Just before exiting the temple, guests can look to the right hand side of the boat to spot several columns on the temple walls. One of the columns features a Hidden Minnie who is comprised of a section of rock that has crumbled off. Minnie is sporting her signature bow and can be spotted in silhouette.

Guests traveling across the world on the Jungle Cruise will find many unique items and artifacts in the jungle including a plane. While the plane may seem to be in working order, only half of it is actually located at the Jungle Cruise. The other half of the plane was located in the Casablanca scene over in Disney’s Hollywood Studios on The Great Movie Ride before the attraction closed on August 13, 2017. We can’t help but wonder what Disney will do with the other half of the plane now!

In addition to the exotic animals and skippers, guests also encounter some natives while exploring the rivers of the world. At one point an abandoned party can be spotted on the right hand side of the boat quickly followed by a three person ambush on the left. Those who listen closely can hear the first two natives yell out cries and attack calls, but the third yells something a little more random. Guests who really listen closely can hear the third attacking native yell out “I love disco!”

4. Employee of the Month

The queue of the Jungle Cruise is filled with incredible details which help to bring the backstory and environment of the attraction to life. Guests can listed to entertaining announcements over the PA system, check out signs and artifacts from previous expeditions, and spot a sign which honors the employee of the month. Despite the title of employee of the month, guests should probably question the individual currently being honored whose name is E.L. O’Fevre.

Amongst the many props found on the queue and near the exit of the Jungle Cruise, there is one item which pays tribute to a beloved past attraction found in the now extinct Pleasure Island. A favorite spot of many guests called the Adventurers Club used to be found in Pleasure Island and featured many unique props and characters which related closely to the Jungle Cruise. While the club is no longer there today, guests can spot a crate at the Jungle Cruise addressed to the club’s president, Pamela Perkins.

One of the exotic scenes found in the Jungle Cruise showcases a pristine beach with three canoes stored on the shore. While the canoes seem to be carved by the natives nearby, guests who look closely will notice that they resemble Mickey, Donald, and Goofy!

Each skipper on the Jungle Cruise is hilarious in their own right and many of them truly enjoy their jobs and making guests laugh all day. The humor of the skippers is definitely unique and combines sarcasm, dry humor, and classic jokes designed to keep guests laughing. While every skipper is hilarious, you never know what some of them might continue on to do as previous skippers have included John Lasseter and Kevin Costner!