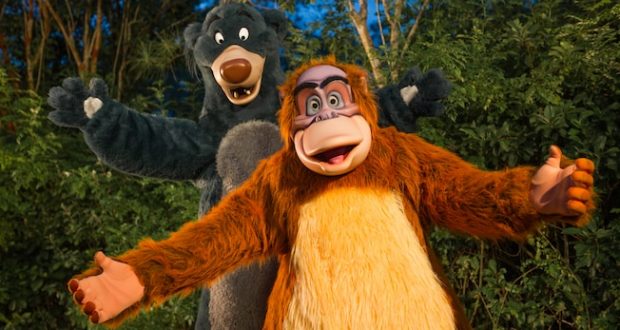 8 Characters That Used to Be at Walt Disney World

In addition to the thrilling rides, interactive attractions and live entertainment Guests have come to love and look forward to at Walt Disney World, there are also meet and greets with characters—or “character encounters” offered to Guests seven days a week. Who would ever pass up the chance to say hello to Mickey, Minnie, Donald, Goofy, Pluto or any of the beloved Disney characters? There are dozens of Disney characters who meet Guests in the parks every single day, but some characters that we used to enjoy meeting at Disney are no longer there, and that makes us sad. So in honor of those we used to love to say hello to—but now are unable to—we present this list of eight characters we miss in the parks.

Diehard Disney World fans remember the original version of the Journey Into Imagination attraction. The original version was a 14-minute ride aboard an omnimover ride vehicle and was hosted by Dreamfinder, a jolly red-headed man with a top hat and red beard. Dreamfinder had an amazing contraption called the Dreamcatcher, and Figment—the lovable purple dragon—was “born” from the Dreamcatcher, which acted as a representation of the power of the imagination. The ride took Guests through Dreamfinder’s imagination, as well as Figment’s imagination. It then took Guests through four areas of the imagination—an artistic area, nightmare and book area, an acting area and a science area. The version we enjoy today completely did away with Dreamfinder, even though Figment is still there. Dreamfinder and Figment used to conduct a meet and greet with Guests at EPCOT, but once the attraction changed, the character encounter was done away with as well.

Merlin is the whimsical wizard from Disney’s The Sword in the Stone, and he used to meet Guests at Magic Kingdom in Fantasyland at the sword in the stone near Prince Charming’s Regal Carrousel. He interacted with Guests and allowed several the coveted chance to pull the legendary sword from the stone. Occasionally, one very agile (or very lucky) Guest would meet the challenge and pull the sword out of the stone. Alas, Merlin has moved on, presumably with his loyal owl, Archimedes.

The two lovable bears from Disney’s Brother Bear once met Guests at Disney’s Animal Kingdom. But because the feature film never reached the popularity Disney had hoped for (in fact, some viewed its lack of success as a complete flop), it made sense to shelve the character meet and greet as well. Since the movie wasn’t very popular, we can only assume Disney World thought the characters wouldn’t be either.

5. Push the Trash Can

Push the Trash Can wasn’t a character from a Disney film. Rather, he was a park-only character (like Figment and Dreamfinder) that used to interact with Guests at Tomorrowland inside Magic Kingdom. Push was so named because of the word “PUSH” on the flap of the trash can. Push was controlled by two Cast Members among the crowd who were dressed in plain clothing—one who used a remote control to move Push around the area and one who lent his voice to Push. Because the duo of Cast Members always stayed within 20 feet of the animated trash can, Push always had the appearance of interacting specifically with Guests right there in the crowd. He’s been gone from Disney World for several years now, and many park fans wish he could make a comeback.

In 2016, the story of a young girl from Hawaii who chose to fulfill her purpose, even if it meant defying what her father told her, hit theaters in the form of the feature film Moana. The film was an instant success, and to further promote the movie, Disney World welcomed Moana to Disney’s Hollywood Studios inside the One Man’s Dream attraction. Even though the film was successful, Disney World opted not to keep Moana on its list of daily character encounters, and alas, she has been gone for quite some time now. You can however meet Moana at Magic Kingdom’s special ticketed events including Mickey’s Not-So-Scary Halloween Party and Mickey’s Very Merry Christmas Party.

3. Beast (with an exception)

Once upon a time, Belle’s ferociously furry beau met Guests in EPCOT at the France pavilion on the World Showcase alongside her. But sadly, Guests can no longer meet Beast at EPCOT. We can still say hello to Belle in her trademark blue and white dress along the promenade in front of the France pavilion, but today, the only place to catch a glimpse of Beast is after dinner at Be Our Guest Restaurant. During this encounter, Beast poses for pictures with Guests, but he does not sign autographs. And if you don’t have a reservation for dinner at the popular French-inspired restaurant, you sadly won’t get to see Beast at all.

King Louie—the loud orangutan king of the jungle in Disney’s The Jungle Book, as well as Baloo—the bear who was buddies with Mowgli, the man cub—used to meet Guests at Walt Disney World at Upcountry Landing in the Asia section of Animal Kingdom. But in April of 2018, Baloo and King Louie bid a tearful farewell to their adoring fans, and the character encounter was done away with. This seems strange, especially given that Animal Kingdom is the perfect park in which to commemorate The Jungle Book and to honor its beloved characters.

The lovable blue ant from Disney/PIXAR’s A Bug’s Life made his home inside Disney’s Animal Kingdom once upon a time—and that time wasn’t so long ago. In fact, Flik only stopped meeting Guests in April of 2018. He was located at Discovery Trails West near the Tree of Life, which was fitting, as it was near the entrance to the “It’s Tough To Be a Bug” attraction that was largely based on the same feature film. Today, you won’t find Flik at Disney World, but you will find petitions online to bring him back. Time will tell how effective those petitions are.