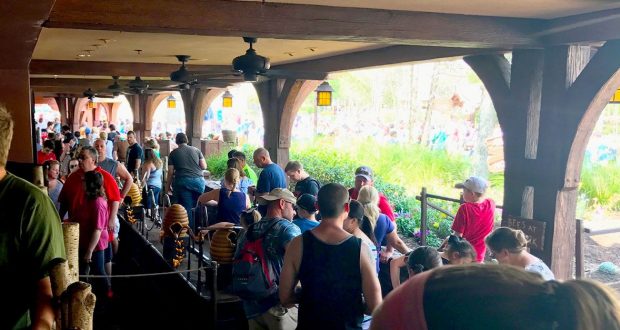 Since Winnie the Pooh is loved across the globe, you’ll find versions of The Many Adventures of Winnie the Pooh worldwide. Not only is it at the Magic Kingdom at Walt Disney World, you’ll also find rides with the same name at Disneyland Resort, Hong Kong Disneyland, and Shanghai Disneyland Park. At Tokyo Disneyland, it’s Pooh’s Hunny Hunt, which uses a trackless system. For the most part, the information here refers to the Walt Disney World version.

If you’re going to travel into Winnie the Pooh’s stories, you need to do it in style. That is why your ride vehicle is a Hunny Pot. The track allows you to feel like you’re part of the story, so you’ll bounce with Tigger and float through a rainy place. There is no height restriction, and there are no medical advisories.

Like many rides at Walt Disney World that are based on characters or movies, you’ll exit into a gift shop. Called Hundred Acre Goods, you’ll find Winnie the Pooh related T-shirts, hats, and other typical souvenirs. Of course there are also plenty of plush toys featuring Pooh and friends for sale. The shop isn’t huge, but the opening at the front is large, making it feel bigger than it actually is.

The Many Adventures of Winnie the Pooh is an extremely popular ride. That might not really be a “cool” fact, but it is good to know. It’s not extremely hard to get FastPass+ for, but if it’s on your must-do list you might want to go ahead and grab it if you can. Of course, the little ones in your party are not going to want FastPass+ for this one, because…

The Many Adventures of Winnie the Pooh has one of the most fun interactive queues at Walt Disney World, especially for the preschool set. There are four different areas that will keep the kids busy if the wait is long. The queue is so popular that it is not unusual for one adult to move ahead in the line, while another adult stays in the interactive area so that the children can play a little while longer.

Outside of The Many Adventures of Winnie the Pooh you’ll find a popular character meet and greet. Featured are usually Pooh and Tigger, although others might join them, especially during special events. If you don’t want to wait in line or you want to meet Eeyore and Piglet as well, make a reservation for The Crystal Palace. That’s located on Main Street, U.S.A., and characters are present for all three meals.

Something had to go to make space for The Many Adventures of Winnie the Pooh. When it was announced that Mr. Toad’s Wild Ride was to close to make way for the new attraction, it was not without controversy. There were protests, T-shirts, and letter writing campaigns, but they did no good. Mr. Toad’s Wild Ride closed permanently on September 7, 1998, and The Many Adventures of Winnie the Pooh opened almost nine months later. Look to the left when you’re riding through Owl’s House. There’s a picture on the wall of Mr. Toad handing over the deed to the property to Owl. At Disneyland Park the two rides coexist peacefully, although they’re in two different lands.