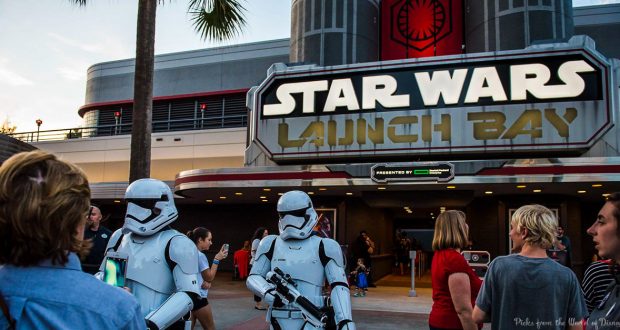 Disney’s Hollywood Studios is undergoing its biggest transformation ever. This summer Toy Story Land will open. In 2019, Star Wars: Galaxy’s Edge will be added to the park, featuring the new planet Batuu. There are several Star Wars related activities and attractions currently in the park, creating excitement for the future of both the Star Wars franchise and Disney’s Hollywood Studios. One of the most popular is Star Wars Launch Bay. If you haven’t visited Star Wars Launch Bay yet and you want to check it out, you should plan a trip for well before 2019. There is no word that Launch Bay will close when the new land opens, but given the fact that it’s clear across the park it very well might. You don’t want to take any chances. There are plenty of things to love about Star Wars Launch Bay; here are eight of them.

No matter which Star Wars movie is your favorite, you’ll find it well represented at Launch Bay. Not only is the original trilogy covered, but you’ll find nods to the prequels and also the movies that have been released since Disney purchased Lucasfilm. You won’t find only the Skywalker Saga, Rogue One is also included, and we can assume that Solo: A Star Wars Story will be added in 2018 as well. There are also nods to Star Wars: The Clone Wars and Star Wars Rebels. If you’re looking for a display featuring The Star Wars Holiday Special, you might want to look elsewhere.

Star Wars: A Galactic Spectacular is an incredible fireworks and projections show that every Star Wars and Walt Disney World fan needs to experience. Add in some sweet treats like Darth Vader Cupcakes and beverages, and it’s near perfect. Star Wars: A Galactic Spectacular Dessert Party takes place most nights at Disney’s Hollywood Studios. The dessert party itself is held inside Launch Bay, and then everyone will head over to a reserved viewing area to enjoy the show.

At most Walt Disney World attractions you want to spend as little time in line as possible. For some Star Wars fans, they will never be able to spend enough time in the queue line outside of the main area. The line features reprints that include movie posters, Ralph McQuarrie’s conceptual designs, and more. Unfortunately, there is usually no line, and this incredible display is missed by most. Ask a Cast Member if you can take a few minutes to look the display over. It’s amazing.

If you love to learn behind the scenes tidbits, you will want to head towards Launch Bay Theater. Inside there is a ten minute film that includes short interview clips with several key players. You don’t have to watch the film in order to enjoy Launch Bay, but it’s definitely worth ten minutes of your time. You might want to watch it twice so that you don’t miss anything.

There are plenty of places at Walt Disney World where you can buy Star Wars merchandise, but Launch Bay Cargo is different. You’ll be able to pick up things here that aren’t sold elsewhere. Who doesn’t want a photo autographed by several stars, or an authentic Han Solo costume? Wouldn’t a Boba Fett statue look fantastic in your living room? Many of the products in Launch Bay Cargo are high end, but there are also some that are more affordable. You can also design your own MagicBand or cell phone case here.

One of the coolest things about Star Wars Launch Bay is that it is part museum. It features full sized replicas of props from all of the movies. There are replica costumes and models as well. You will be walking through the history of the films. Give yourself plenty of time, because you will not want to miss anything. Even though they are replicas, they are the correct size and scale, giving you a better appreciation of what it takes to make an epic film.

Character greetings are an important part of many Walt Disney World vacations, and at Star Wars Launch Bay you’ll find three options that are quite different from each other. Currently you can meet Chewbacca, Kylo Ren, and BB-8. There are three different lines, and FastPass+ is not an option. The Wait Times are usually more reasonable than you might expect, and they are posted outside, before you enter the attraction. With more Star Wars on the way the characters could change. When Star Wars Launch Bay first opened Darth Vader greeted instead of Kylo Ren, and BB-8 was added later.

Since Star Wars continues to grow, Launch Bay needs to as well. Fortunately, it is easy for Disney to add new models or new pictures without having to shut down for a lengthy refurbishment. When something new has been released in theaters, you can expect to find plenty of related items at Star Wars Launch Bay.