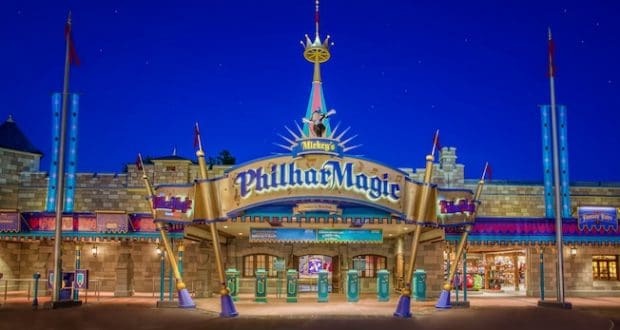 Mickey’s PhilharMagic in Magic Kingdom is one of my favorite underrated Disney attractions. It’s so simple, while being fun, happy, and magical. There are some really cool things about this 3D adventure attraction, too. So put on your opera glasses and check them out!

I love the 3D technology in Mickey’s PhilharMagic. It’s probably not as state of the art as it could be at this point, but there’s still a certain magic to it. One of the scenes in the show is the magic carpet ride between Aladdin and Jasmine. But this time, Donald (and you!) tag along. As your carpet soars in and out of Agrabah, it actually feels like you’re flying! Left around street corners, right into clothes stalls, upside down past people, all over!

A cool thing about this attraction is that it drops you right into your favorite Disney movies. From The Little Mermaid to Beauty and the Beast to Peter Pan, you are right there with them. Because of the size of the screen and how it curves into the theater, it feels like you’ve been sucked into the movie. And if there’s anything better than watching a Disney movie, it’s being in one.

It is very, very difficult to not sing along in this attraction. The gist of this ride is that you’re spending a night at the theater, so music really is supposed to be the focus. Of course, Donald makes that a little difficult, but it’s the thought that counts. Some of the most iconic Disney songs are in this attraction. The list is impressive: Be Our Guest, Part of Your World, A Whole New World, You Can Fly, and I Just Can’t Wait to Be King. I promise you’ll have one of them stuck in your head for the rest of the day.

Now, clearly the lines at Disney always vary. But generally this line is relatively short. Because Mickey’s PhilharMagic is first and foremost a movie, a lot of people can be let in at a time. This helps. It’s also just not the most popular Disney attraction. While I feel that this is wrong, it also helps. Most of the time, though, I don’t even mind the wait because it’s so beautifully air-conditioned. This is a great one for a cool down, even in line.

If, however, there is a long line you still get to be entertained! This is Disney, after all. Along the walls of the queue area are old-fashioned, cabaret style posters. They feature some famous, and not so famous, Disney characters setting up for their cabaret act. Some of my favorites include: An Evening with Weezy: Now in its Final Squeak, Genie Sings the Blues, and Hades: Torch Songs. These are so clever and really fun to help pass the time.

The venue of this attraction is cool in and of itself. Mickey’s PhilharMagic takes place at the Opera, so an Opera Theater is where Disney takes you. With seating for close to 500, the room is grand and spacious, with musical instruments carved into the walls and a great red curtain. What’s super cool is when Donald steals the hat and the theater kind of goes away as guests are sucked into the story. When Mickey saves the day, the theater magically comes back together again. Make sure to look behind you when Donald gets blasted out of that tuba!

In the Be Our Guest sequence, the theater pumps out actually scents of some of the feast! I can’t get a whiff of apple pie and not think of this attraction. The absolute best, coolest part is when Lumiere tells you to “try the gray stuff, it’s delicious!” and suddenly you can actually smell the gray stuff. To this day I’m not totally sure where the smells come from, but I love it!

Poor Donald. He always wants the spotlight, doesn’t he? Well, Mickey’s (ahem) PhilharMagic is finally his chance! The whole movie happens because Donald’s behaved badly and Mickey is still the hero in the end. But we get to go along with Donald on this adventure and see the world through his eyes for a bit. It’s a great opportunity for Donald and those of us that want to show him a little love. It’s also really funny to see a sassy Mickey at the end… *tap, tap, tap * “Thank YOU!”