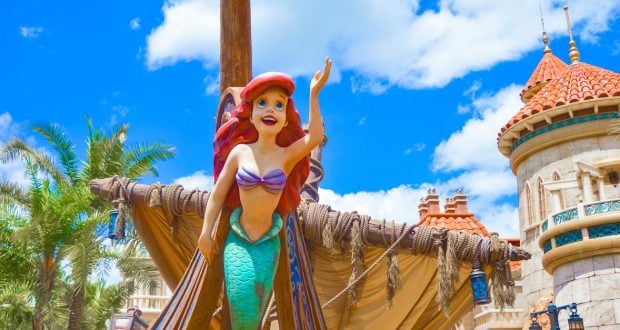 Walt Disney World’s revamped Fantasyland has to be our favorite part of the Magic Kingdom.  With exciting attractions like Seven Dwarfs Mine Train, and new eateries like the wildly popular Be Our Guest Restaurant and Gaston’s Tavern, there’s easily enough here to while away half a day.  And when you’re here, you’ll want to check out Under the Sea: Journey of the Little Mermaid.  It’s a relaxed, family-friendly ride, and a beautiful addition to Fantasyland.  Here are 8 of our favorite things about Under the Sea.

If you’re looking for Hidden Mickeys, you’ve come to the right attraction!  If you keep your eyes peeled, you could find as many as 7 throughout Under the Sea: Journey of the Little Mermaid’s queue and ride.  Our favorite Hidden Mickey, though, can only be seen once a year, on Mickey Mouse’s birthday (November 18th).  On this day every year at noon, the sun shines through a very special rock carving at just the right angle to create a Hidden Mickey on the wall of the queue.  But you’ll have to time your visit perfectly, because this super-rare Hidden Mickey only lasts for around 7 minutes!

Ursula the Sea Witch is by far our favorite audio-animatronic on this attraction, and she’s also the most detailed animatronic on the ride.  Standing 7.5 feet tall, with a girth of 12 feet, she is definitely a commanding presence!  It helps that she sits slightly higher than the floor of the ride.  Disney Imagineers were able to effectively channel the creepy, foreboding atmosphere of Ursula’s lair from the animated film, creating a scene that might actually be a little too scary for very young guests.  You’ve never seen Ursula like this before!

Our first time on Under the Sea, we couldn’t help but wonder how Disney Imagineers would create the underwater world of Ariel and her friends.  And in true Disney fashion, the transition from the human world to under the sea is breathtaking!  There is a distinct temperature drop at the beginning of the ride, and it coincides with a physical drop in the ride’s track.  As your clamshell descends into the cool “water”, the colors around you also change and bubbles appear, signalling your entry into Ariel’s world.  The physical and visual cues are reversed at the end of the ride, as you re-enter the human world.

Can’t get enough of everyone’s favorite mermaid?  Well, you’re in luck.  Walt Disney World’s Under the Sea has an attached character meet and greet where guests can stop by to meet Ariel herself!  Either before your journey under the sea, head next door to Ariel’s Grotto for autographs and photos with Ariel, right in the comfort of her own grotto among some of her favorite treasures from the human world.

One of the things we love about Under the Sea: Journey of the Little Mermaid is that it has shorter wait times than many other popular rides in the Magic Kingdom.  (So if you’re not able to snag a FastPass+, it’s not a big deal!)  The reason for this is that the ride uses Omnimover technology, unlike, for example, Seven Dwarfs Mine Train, which is a roller coaster.  The result is that Under the Sea is able to more guests at a time through the attraction, which means less of a wait for you and your little ones.

Disney Imagineers are well known for creating imaginative, interactive line queues for theme park rides, and Under the Sea is no exception.  The exterior of the ride is one of the most attractive in the Magic Kingdom.  From Eric’s castle, to the shipwreck details, to the artificial rock formations incorporating bits of seashells, no detail is overlooked.  While waiting in line, guests can interact with Scuttle while playing Scavenger Hunt to help the crabs sort out Ariel’s treasures.  There’s also an audio-animatronic Scuttle later in the queue, who talks to guests about all the objects the crabs have found during the game.  So in the unlikely event that you do have a long wait, you’ll have plenty to do and see!

Of course, the music of The Little Mermaid is one of the things that made the animated film such a hit.  So it’s no surprise that the music for Under the Sea is one of the draws for this Magic Kingdom ride.  The film’s songs (by Alan Menken) were adapted for the ride, and new instrumental music was written for the ride’s finale, loading area, and for some transitional scenes.  Some of the scenes use new vocal performances for key characters, but fans of the classic film will recognize several voices from the film throughout the ride, including Jodi Benson as Ariel and Pat Carroll as Ursula.

If you visited Walt Disney World’s Magic Kingdom before 1994, you may know that the spot currently occupied by Under the Sea: Journey of the Little Mermaid was once home to an attraction with a similar name – 20,000 Leagues Under the Sea.  You can find nods to the previous ride (paying homage to rides that have come and gone is a common Imagineer trick) throughout the current attraction.  Guests with sharp eyes can spot the impression of the Nautilus submarine on one of the rock formations in the queue.  And before 20,000 Leagues departed, Imagineers bottled up some of the ride’s water, storing it for almost 20 years until Under the Sea opened, at which point the bottles of previous ride water were poured into the new ride – proving that no attraction in Walt Disney World is every really gone!