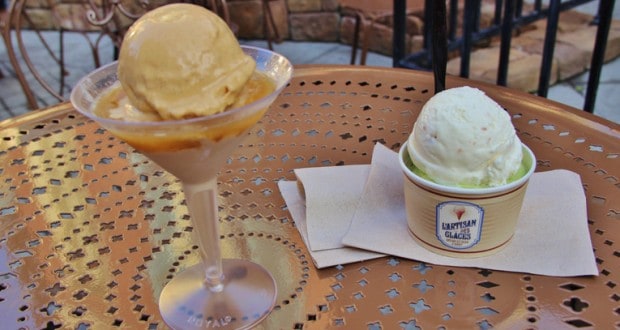 Who doesn’t love ice cream? It’s the perfect treat to cool you off on a hot day in Florida, and it can be a filling snack as well. Walt Disney World insiders love their ice cream as much as anyone else does. Here are seven things that you need to know about ice cream on Walt Disney World property.

No matter what you’re in the mood for, you will be able to enjoy a frozen treat. You can find hand scooped ice cream, soft serve ice cream, ice cream on a stick, frozen dairy-free treats, sundaes, cups, cones, and more. You also won’t need to go very far to find something cold and refreshing. Ice cream is sold in restaurants, at snack stands, in stores, and at portable kiosks. You’re sure to find something filling and satisfying without having to wander all over the park.

A Walt Disney World vacation is expensive, and many families need to watch their budgets while visiting Central Florida. Mickey’s Ice Cream treats cost under $5.00 each. While that’s by no means cheap (especially when you can buy a box of frozen treats for the same price at your local grocery store) it’s still affordable to those who are on a budget. If you’re on the Disney Dining Plan, the bars count as a snack credit at most places. If your budget is tight, consider making a Mickey’s Bar a special treat for your last day. It will be worth the wait.

Gelato is Italian ice cream. It’s softer than American ice cream, and some would say that it’s creamier. It is also available at several places on Walt Disney World property. Gelato is offered as a dessert at several counter service restaurants. You can also find two places that specialize in this incredible dessert. At Gelati in the Italy Pavilion at Epcot you can try gelato in scoops or between two chocolate chip cookies. A newer option is Vivoli il Gelato at Disney Springs. The Vivoli family of Florence, Italy have been making gelato for over 85 years, and they’ve brought their recipes and expertise to Walt Disney World. Of course there are other international ice creams served in World Showcase as well. Here’s an insider hint; stop by France and Japan for very different, but delicious, international frozen treats.

If you want to try a near-perfect combination, you will need to make Ghirardelli Ice Cream & Chocolate Shop at Disney Springs part of your vacation. Ghirardelli is known for chocolate, and when it’s mixed with rich, creamy ice cream you have a winning combination. You’ll find creations such as The Ghirardelli Square World Famous Hot Fudge Sundae and The Crissy Field Cookie Bits Sundae. The hot fudge is house made, and it is exactly what you would expect from a company known for its chocolate. You can create your own sundae, or maybe instead you’d prefer a shake or a float. There are even some lighter options on the menu. At Ghirardelli Ice Cream & Chocolate Shop, you’ll feel like you died and went to Ice Cream and Chocolate Heaven.

Mickey’s Premium Ice Cream Bar is the first must-try ice cream treat at Walt Disney World. The second is Dole Whip, which technically isn’t ice cream. What it is instead is a smooth and creamy pineapple flavored treat. The plain version is vegan, or you can swirl it with vanilla. Dole Whip can be served in a cup or as a float with pineapple juice. Dole Whip is mainly found at Aloha Isle at the Magic Kingdom, but it pops up from time to time in other places as well. If you head over to Pineapple Lanai at Disney’s Polynesian Resort, you can order Dole Whip in a souvenir bowl. You can also find the Dole Whip at Pop Century Resort. On a hot day there is nothing quite as refreshing as Dole Whip.

Disney Insiders know that the ultimate ice cream creation cannot be found in the theme parks. If you want to try ice cream like you’ve never experienced before, head to Beaches & Cream Soda Shop at Disney’s Beach Club Resort and order the Kitchen Sink. Insiders also don’t order any food before, because this sundae is huge. It is meant to serve four, it contains eight scoops of ice cream and more toppings than you can imagine. You’ll find brownies, candy bars, cookies, sprinkles, and a whole can of whipped cream. There are other surprises in there as well. The sundae is served in a bowl that is shaped like a kitchen sink, hence the name. If you and your family love ice cream, you will want to tackle the Kitchen Sink.