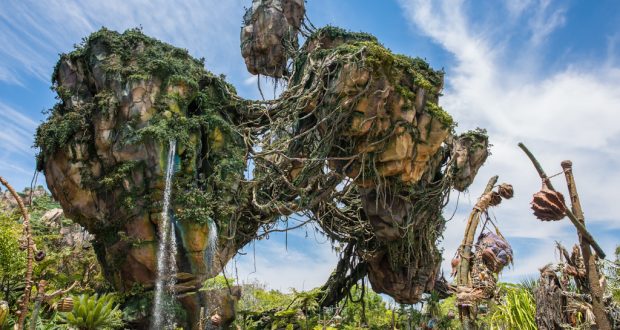 Of the four theme parks, a favorite of many guests is Disney’s Animal Kingdom which opened on Earth Day in 1998. The park aims to teach guests all about nature and the environment in fun and educational ways while stressing the importance of conservation and preservation. With plenty of amazing attractions, beautiful details, delicious dining, and world class entertainment, it is no wonder why so many guests love Disney’s Animal Kingdom. While some guests might think that they are very familiar with the park and know all that there is to know, they might be surprised to learn that there are many hidden secrets and details to be found. From interesting architecture to Hidden Mickeys, there are lots of secrets for guests to find in Disney’s Animal Kingdom. Here are eight secrets that most guests don’t know about in Walt Disney World’s Animal Kingdom.

8. The Tree Of Life’s Support

The icon of Disney’s Animal Kingdom is the massive Tree of Life which soars high into the sky with hundreds of vibrant green leaves that gently sway in the breeze. The highlight of the Tree of Life is its huge trunk which features hundreds of intricately carved animals which are so realistic that they seem alive. Since the Tree of Life is so impressively large, Imagineers faced a difficult problem in figuring out how to support the structure while leaving space in the roots for the theater which houses It’s Tough to be a Bug. The solution came in the form of a previously used oil rig which was flipped upside down creating lots of support for the hundreds of branches while leaving an open space on the bottom. While many guests are very familiar with the sight of the Tree of Life, they may not have known that there is an oil rig inside!

Guests who wander along the pathway between the Africa and Asia sections of Disney’s Animal Kingdom can enjoy beautiful scenery, lush vegetation, details, views of the Tree of Life, and plenty of ambiance. While wandering along this path, guests might even walk right past a wonder performer who tends to remain a bit of a secret as she blends in so well! DiVine is a live performer who is mounted on stilts and almost blends into the lush surroundings since she is painted and decked out in leaves and green accents to look like a living and breathing plant. DiVine is a wonderful performer to spot in Disney’s Animal Kingdom, but guests definitely have to pay attention or they might wander right past her.

If you’ve had a chance to visit Animal Kingdom’s newest land, Pandora – The World of Avatar, chances are you were impressed with its sheer beauty! You were likely rushing to one of the two attractions held in this land known as Avatar Flight of Passage and Na’vi River Journey. If you have a moment to stop and explore Pandora’s setting (the Valley of Mo’ara), you might want to look up at the unbelievable floating mountains. Get this – there are 22 floating mountains in total! Plus, look around at the lush landscape and be in awe of the 250 varieties of living plants that are integrated with Pandoran plants. Just amazing!

One of the most thrilling attractions in Disney’s Animal Kingdom is Dinosaur in the Dinoland section of the park. The attraction invites guests into the Dino Institute where the technology to travel back to the time of the dinosaurs has been perfected. Before boarding their Time Rovers, guests enter into the loading area and descend down a staircase. At the base of the staircase and to the left is a trio of pipes which are red, white, and yellow and feature complicated chemical formulas. While the pipes may seem like a random detail to add depth to the attraction, they represent ketchup, mayonnaise, and mustard and pay homage to McDonald’s which was the original sponsor of Dinosaur when it first opened.

Many guests who spend time in Disney’s Animal Kingdom simply can’t leave without at least one ride on Kilimanjaro Safaris. The popular attraction is found in the Africa section of the park and invites guests into the Harambe Reserve for a two week safari with plenty of up close animal encounters. Guests can board authentic safari vehicles and encounter animals like giraffes, elephants, zebras, rhinos, and cheetahs along the way. Kilimanjaro Safaris is very popular with guests and is also home to one of the largest Hidden Mickeys in all of Walt Disney World. As guests pass by a beautiful island filled with vibrant pink flamingos, they should pay specific attention to the shape of the island as it forms a massive classic Hidden Mickey.

The Asia section of Disney’s Animal Kingdom is dominated by the massive mountain range which is home to Expedition Everest. The thrilling attraction brings guests deep into the Forbidden Mountain where they come face to face with the fabled Yeti. Before boarding the attraction, guests move through a beautifully detailed queue which features the offices of a mountaineering company and a museum dedicated to the legend of the Yeti. One of the rooms of the queue features a supply room filled with many different food and drink options to pack for an expedition. Guests who look closely in one of the cabinets of that room can spot a tea with the appropriate name “Ye-tea.”

Another thrilling attraction found in the Asia section of Disney’s Animal Kingdom is Kali River Rapids which takes guests on a soaking journey down the Chakranadi River. Guests board family style rafts and get to experience the beauty of the untouched jungle before learning firsthand the devastation caused be illegal logging. In the beginning of the attraction, guests float by a large rock formation with a gently gurgling waterfall. Those who look closely can notice the large face of a tiger hiding in the rockwork!