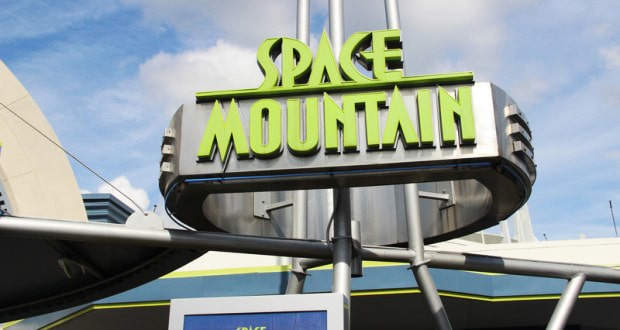 When many guests visit Walt Disney World, they love to spend plenty of time in the Magic Kingdom enjoying the amazing attractions and experiences that the park has to offer. While many of the attractions in the Magic Kingdom are classic experiences, the park is also home to some big thrills including a unique attraction found in Tomorrowland. Space Mountain is a massive white structure in the rear of Tomorrowland which is so large that is can be seen from outside the park! Featuring futuristic architecture and a simplistic style, Space Mountain easily draws guests in for an unforgettable adventure through space. While many guests love to enjoy a ride on Space Mountain, they might be surprised to learn that the attraction features several interesting facts and secrets. From historical references and fictional resorts to surprising speeds and galactic names, Space Mountain has many facts that guests might not know about. Here are the top seven facts and secrets about Space Mountain that guests can discover on their next visit to the Magic Kingdom in Walt Disney World!

After entering into the building that Space Mountain is housed in, guests encounter a rather lengthy attraction queue which brings them into the heart of the attraction. While moving through the queue, guests pass by a variety of space scenes, interactive games, and a sign which declares the area Starport 75. Starport 75 is meant to be an intergalactic spaceport which serves the many residents of the galaxy, but it also features a historical nod as well. The title Starpot 75 was chosen specifically to pay tribute to the fact that Space Mountain opened in 1975.

There are several large signs found throughout the queue of Space Mountain which showcase the different sectors of the galaxy and the locations found within them. One sector features a futuristic Disney vacation destination called Disney’s Hyperion Resort. While this might seem like a whimsical detail to add to the attraction, Hyperion also pays homage to the street where the Disney brothers’ first studio was located.

5. View from the TTA

Since Space Mountain is considered to be one of the most thrilling attractions in Walt Disney World, guests might easily assume that it reaches some high speeds. While this may seem the case as guests rocket through the darkness of space, they may be totally surprised to learn that Space Mountain only reaches a top speed of 28 miles per hour making it one of the slowest thrill attractions in Walt Disney World!

Guests love to enjoy Space Mountain time and time again thanks to its two different tracks offering similar but different experiences. The tracks are called Alpha and Omega and each bring guests to a different side of the mountain for a nearly mirrored experience. Guests who enjoy a ride on the Alpha side technically enjoy a longer ride experience as that track is roughly ten feet longer allowing it to cross over the Omega track.

Part of what makes Space Mountain so amazing for guests is the overall atmosphere of the attraction. Once on board the rockets, guests are immersed in near darkness and enjoy the thrill of whizzing past stars and other galactic objects. One of the best elements of the atmosphere of Space Mountain is the exciting soundtrack which is supplied through the appropriately named Starry-O-Phonic Sound System.

After returning to Starport 75 at the end of their journey, guests embark on a very long moving sidewalk to return to Tomorrowland. Just before stepping onto the moving sidewalk, guests can spot a pile of suitcases which are ready to be transported through the galaxy. On one of the suitcases is a sticker advertising Mesa Verde which seems like a fictional location but pays reference to an extinct Epcot attraction. Horizons was open from 1983 to 1999 and showed guests the possibilities of the future including an ending where guests were able to choose one of three endings. One ending featured Mesa Verde which was a desert like environment with new agricultural technology. So guests who are exiting Space Mountain can pause for a moment and remember the wonderful attraction Horizons.