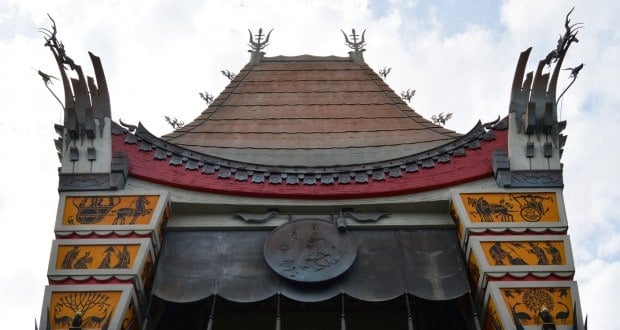 When guests first enter into Disney’s Hollywood Studios, they are greeted with a wonderful view down Hollywood Boulevard which culminates a replica of Grauman’s Chinese Theater in Los Angeles. The building features beautiful architecture with stunning details! One of the best ways to just enjoy the beauty of the structure is to stand in the courtyard where many different famous Hollywood actors and actresses have left behind their handprints in the cement… known as the “Yard of Fame”.

6. View From The Twilight Zone Tower of Terror

One of the most popular attractions in Disney’s Hollywood Studios can be found on the end of Sunset Boulevard. The Twilight Zone Tower of Terror invites guests into the beautiful Hollywood Tower Hotel which was abruptly abandoned years ago after five guests were trapped inside The Twilight Zone when their elevator was struck by lightning. Guests who are brave enough to board service elevators soon find themselves in for a similar fate as the tower takes control and begins a sequence of thrilling drops and rises. At one point during the drop sequence, doors in front of guests open showcasing a beautiful aerial view of Disney’s Hollywood Studios.

A quiet area of Disney’s Hollywood Studios that many guests love to spend time in is Echo Lake. Home to several attractions and shows, the area features a small lake with several interesting structures along its shores. Guests can simply enjoy the beautiful breeze and view along Echo Lake while dining on quick service options at Min and Bill’s Dockside Diner or the gentle smile of Gertie the dinosaur.

While there is a beautiful view from the top of The Twilight Zone Tower of Terror, the attraction is also an integral part in the beauty of Sunset Boulevard. Guests who enjoy this area of the park can feel transported back to the glitz and glamour of Hollywood in the roaring 1930s and 1940s. The street is home to beautiful storefronts and gently swaying palm trees and features the looming Hollywood Tower Hotel in the distance. With amazing details and wonderful ambiance, Sunset Boulevard is one of the most beautiful sights in Disney’s Hollywood Studios.

Muppet Vision 3D is an attraction which brings guests into the Muppets’ laboratories where the spirit of 3D has been discovered. As usual, chaos ensues as only the Muppets can create, making for a hilarious and entertaining time. Outside of the large brick building which houses Muppet Vision 3D is a wonderful courtyard which features interesting details and several places to sit an enjoy the ambiance. We especially love the addition to this area to include BaseLine Tap House which resembles a small brewery in California.

Hands down the most popular attraction in Disney’s Hollywood Studios is Toy Story Mania in the Pixar Place section of the park. The attraction magically shrinks guests down to the size of toys and invites them to compete in a series of 3D midway games hosted by the Toy Story gang. Since the attraction is so popular, it tends to always have lines exceeding an hour, especially on busy days in the park. Therefore, one of the most beautiful sights in Disney’s Hollywood Studios is Toy Story Mania with a low wait time!

Nights at Disney’s Hollywood Studios come to a close with a showing of Fantasmic! in the Hollywood Hills Amphitheater. The show invites guests to partake in a battle between good and evil inside Mickey’s imagination. With special effects, pyrotechnics, fireworks, Disney characters and music, projected animation, dancing waters, and a larger than life dragon, Fantasmic! is an unforgettable show. While the entire show is beautiful, the finale of Fantasmic! is truly one of the most beautiful sights in Disney’s Hollywood Studios and can’t be missed on a visit to the park!