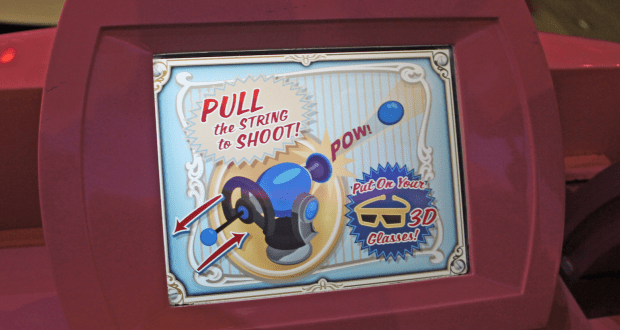 Toy Story Mania combines so many of our favorite things, that it’s consistently the attraction we make a beeline for when arriving at Hollywood Studios.  There are beloved characters (animatronic, virtual AND the kind that will pose with guests) from the Toy Story movies, fantastic classic toys blown up to enormous size, and a whirling 4D carnival ride that will test your shooting gallery skills.  What more could anyone ask for in a ride?

Disney has incorporated several details into Toy Story Mania that might not be immediately noticeable, but which are a breath of fresh air for guests.  Each vehicle consists of two cars that seat two people each, and they move back to back, making it a simple matter to keep your party together.  This way, you can talk to one another as you try your hand at the carnival games, and maybe even engage in a bit of friendly competition?!  There are also specially designed cars that can accommodate most wheelchairs, a welcome fact for many guests.  Finally, although personally I love taking my time in Toy Story Mania’s line to enjoy all of the larger-than-life toys, many guests have found the typically-long lines for this ride daunting.  So, Disney has recently added a third track to the ride to alleviate wait times and allow more guests through in a shorter period of time.  Of course, you can always go first thing in the morning, when wait times are low, or get a FastPass+, to make sure you won’t have much of a wait.

Understandably, no one comes to Walt Disney World to wait in lines.  But because of the Disney penchant for making the journey as memorable as the destination, lines often end up becoming attractions in their own right.  There is perhaps no better example of this than the line at Toy Story Mania.  From the moment you set foot in the ride building – actually, before – the scene is set for a magical Toy Story experience.  You’ll instantly be immersed in the vivid, larger-than-life world of the movies, and you’ll be treated to an elaborate recreation of Andy’s toy and game collection as you wait.  Make sure you snap photos of the giant barrel of monkeys, playing cards, View-Master reel, Candyland board game, Tinker Toys, and Etch a Sketch, just to name a few. Here are classic favorites from childhood, all enlarged so that you’ll feel you’ve shrunk to the size of a toy yourself.

After a practice round where you’ll get used to the toy cannon you’re firing with a pull string, you’ll play five mini-games, and at the end of each game, your car will rotate and whirl you on to the next game.  Each game is a virtual nod to classic carnival midway games, but Toy Story-themed.  You’ll try your hand at a pie-throwing booth, an egg-throwing game featuring Hamm, Buttercup and barnyard animals; a dart throw game (featuring Rex and Trixie’s “dino darts”); a baseball throwing game where you’ll break plates on a green army man firing range; a ring toss game (where Buzz Lightyear will cheer you on as you toss rings onto the Little Green Men); and finally, Woody’s Roundup-themed shooting gallery, where you’ll shoot darts at mine-cart targets.  The games are quite fast-paced, which adds to the excitement.  And regardless of how well you do, the games are so much fun, everyone feels like a winner.  (Plus, any targets you miss, you can just ride again later and hit!)

Throughout Toy Story Mania, you’ll wear 3D glasses, which will bring the characters and the games to life before your eyes.  Familiar Toy Story characters cheer you on at every step, making you feel like one of the gang.  If that wasn’t enough, there are some surprise extras along the way that will keep you coming back for more.  Each game includes at least one “Easter egg” that you can hit, revealing extra targets or game changes.  Plus, you’ll experience more than simple 3D effects in some games, such as blasts of air or sprays of water.  Toy Story Mania truly is an immersive experience!  You’ll accumulate points when you hit your mark, and of course, harder-to-hit targets will earn you more points.  Your score will be posted after each game, and also at the end of the ride, allowing for some friendly competition with family and friends, or helping you to make a new personal highest score.

Believe it or not, it can be almost as entertaining immediately outside Toy Story Mania as it is standing in line or experiencing the ride itself!  You will obviously want to snap shots with your entire family before getting in line, perhaps with the Pixar sign, or the giant Scrabble board game being hoisted up the building’s façade by the army men.  Speaking of which, astonishingly accurate green army men (sporting some of the most fantastic costumes I’ve ever seen on property) often pose for photos with guests outside the ride, and the way they lurk and manoeuvre around on their “plastic” bases is just admirable, not to mention hilarious.  Buzz, Woody and the other characters from the movies can also often be seen just outside ride.  Or you can stop in for some Toy Story-themed merchandise at the shop across from the ride, and take home a memento from your experience!  Our favorite merchandise has to be the strawberry-scented Lotso, available in various sizes – he has to be smelled to be believed!

So the next time you’re in Hollywood Studios, consider following our lead and making Toy Story Mania the first stop of the day.  We’re positive you’ll find your own reasons to love this Walt Disney World favorite!