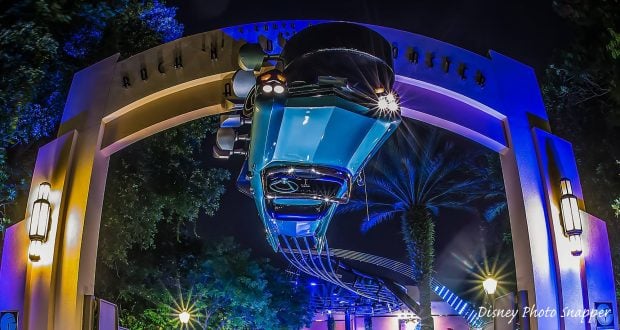 The Rock ‘n’ Roller Coaster Starring Aerosmith invites guests into G Force Records where the band is hard at work recording their next hit. Guests are invite to a concert across town and soon find themselves boarding super stretch limos to rocket through downtown and make it on time. In the loading area of the attraction, guests should look across the tracks to check out a meter that people would normally use to pay their parking garage fees. On the meter is a clever sticker that reads “Just Push Pay” which is a clever reference to the hit Aerosmith song of the same title.

During the pre-show portion of the Rock ‘n’ Roller Coaster Starring Aerosmith when guests find themselves face to face with the band, there are plenty of details to look at that bring the studio to life. Guests who look all around them can even spot a classic Hidden Mickey formed by three perfectly placed coils of wire on the floor of the studio.

Found right next door to the Rock ‘n’ Roller Coaster Starring Aerosmith is another thrilling attraction that brings guests into a classic television series. The Twilight Zone Tower of Terror brings guests into the Hollywood Tower Hotel where five guests mysteriously disappeared years ago after their elevator was stuck by lightning. Guests soon find themselves in for the same fate after entering into the abandoned lobby filled with interesting props and details. Guests who look near the front desk of the lobby will notice a prestigious award proclaiming that the Hollywood Tower Hotel was the recipient of the 13 Diamond Award from AAA. This small detail seems much more eerie when guests realize that the real award only reaches five diamonds.

After passing through the lobby in The Twilight Zone Tower of Terror, guests enter into the library where they learn the story of what they are about to experience. In the film shown, guests witness the five guests disappear as lightning strikes, including a small girl. Those who look closely will notice that the little girl is clutching a Mickey doll!

Toy Story Mania in Disney’s Hollywood Studios magically shrinks guests down to the size of toys and invites them to compete in a series of 3D midway games hosted by characters from the classic Pixar film series. Once seated in their attraction vehicles, guests can look near the entrance to the main experience area and spot a barcode on the midway games box. While the numbers on the barcode may seem random, they pay homage to the origins of the attraction. The numbers 121506 reference December 15, 2006 which was the date that the attraction was announced.

While moving through the queue of Toy Story Mania, guests can check out tons of cool details including classic toys that are larger than life. Many of the toys are used in clever ways, including board games being used for the ceiling. Crayons are scattered about as supports, and guests might notice that the only crayon that is not used is the pink crayon since Andy is a boy and might not tend towards that color.

Guests who enjoy the Star Wars universe will absolutely love spending time in Disney’s Hollywood Studios. In addition to specific Star Wars entertainment and experiences, there is also an attraction that whisks them to galaxies far away. Star Tours – The Adventure Continues begins as a routine Star Tours flight that takes a thrilling twist as a Rebel Spy is discovered on board. Guests can then enjoy a unique adventure that is randomized to be different each time. Before boarding the attraction, guests move through a portion of the queue that features many droids and abandoned metal scraps. Tucked away just below the main path is Rex who was the droid pilot in the previous version of the attraction.

In the same room of the Star Tours – The Adventure Continues queue, guests can check out a blue tinted screen found above where many different recognizable characters pass by in shadow. Those who look long enough might spy a certain loveable droid cruise past wearing iconic Mickey Ears!

Muppet Vision 3D is a hysterical experience that brings guests into the zany world of Kermit and friends. Guests who enjoy the show are sure to find themselves laughing along at the mayhem that the Muppets create including a hilarious pre-show filled with jokes. Before heading into the pre-show area, guests move down a small hallway and past an office that has a sign hanging indicating that the worker will be back in five minutes and the key is under the mat. Guests who are curious and pick up the mat will find that key there waiting for them!