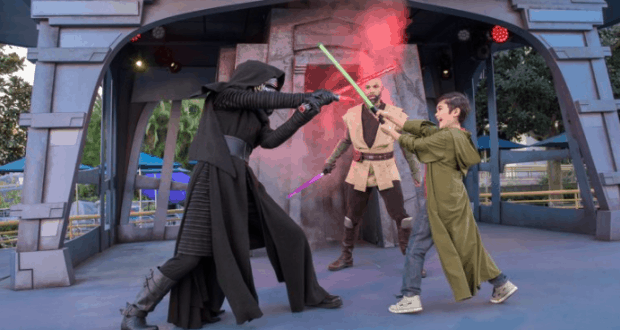 10. For the First Time in Forever: Frozen Sing Along Celebration

I just heard the collective groan of hundreds of parents who are beyond tired of hearing Elsa belt out “Let It Go” and Anna sing about stuffing chocolates in her face.  But I am telling you—your whole family will love the Frozen Sing Along.  Your kids will get to relive favorite movie moments with their favorite Frozen characters on stage and you can all sing out loud to your favorite songs with no shame as everyone else in the theater lets go (pun intended) of their inhibitions and sings.  There are fun special effects too.  But the best part for the adults is the narration.  The Royal Historians who present the story and walk you through from song to song are absolutely hilarious.  Each show is a little different as they ad lib and make what could be torture very entertaining.  And Moms—Kristoff is pretty dreamy. If you have a family of adventurous kids Disney’s Hollywood Studios is the place to be for action packed thrill rides.  Over on Sunset Boulevard you have the perfect 1-2 punch of Rock N Roller Coaster and Tower of Terror.  And with the new FastPass+ tiers you can make FastPasses for both.  Rock N Roller Coaster also has a single rider line so if your kids (and you) are comfortable riding alone you can take advantage of that shorter wait to ride it multiple times.

Disney’s Hollywood Studios has some of the most fun places to eat in all of Walt Disney World.  The Sci-Fi Dine In Theater is one of those places.  Themed as a 1950s Drive In, you are seated in vintage cars “outside” (a night time atmosphere is created on a sound stage indoors).  While you eat you watch silly “horror” movies from the 50s and 60s so entertainment is included.  The menu here is also very family friendly.  The only caution is if you think your children will be frightened by movie clips about giant women, the Blob and other movies of that genre you might want to skip it.

Talk about family friendly!  If you have a toddler or preschooler (or just a fan of Disney Junior TV shows), Disney’s Hollywood Studios is really the best place to interact with those characters. Hollywood & Vine offers a character breakfast showcasing various stars of those shows like Doc McStuffins. Several of the characters also have meet & greet locations in the Animation Courtyard. A stage show called Disney Junior Dance Party features characters from Disney Junior and is an interactive venue that kids love. Fans of Star Wars need to look no further than Disney’s Hollywood Studios—even before the Galaxy’s Edge Land opens.  Star Tours, a simulator ride, is fun for the whole family with some thrills and lots of space travel and encounters with your favorite Star Wars heroes and villains (depending if you are on the Dark Side or the “Light” Side).

5. Jedi Training: Trials of the Temple

Keeping with the Star Wars theme, it is a rite of passage for many younglings to participate in the Jedi Training Academy and prove their skill with the force against adversaries like Darth Vader.  Multiple shows take place daily to allow as much participation as possible, but if your child wants to be a part of the Jedi Training you need to sign them up first thing in the morning as the parks opens—it is a very popular activity and it fills very quickly.  Children ages 4-12 are allowed to participate and they must be with you when you register them.  Registration is currently at the Indiana Jones Adventure Outpost between the Indianan Jones Stunt Spectacular and 50’s Prime Time Café.

One of the newest attractions at Disney’s Hollywood Studios is found in Toy Story Land:  Slinky Dog Dash.  This adorable coaster has family friendly thrills as you take a spin on one of Andy’s favorite toys, the Slinky Dog.  The entire land has your family shrunk down to the size of a toy so that you can enjoy Andy’s backyard from that perspective.  Try to get a FastPass+ for this one, its popularity as a new attraction is big!

While I love Sci-Fi Dine In Theater, my favorite place to eat at Disney’s Hollywood Studios is 50’s Prime Time Café.  It is a family tradition to eat here dating back to when I was just a kid.  Here you are seated in Mom’s kitchen and a staff of your family take care of you.  There are TVs playing 50s shows, all kinds of knick knacks reminiscent of a mid-century kitchen, and a menu filled with home-cooking comfort foods (get the fried chicken).  You have to mind your Ps & Qs—if you get caught with your elbows on the table you may be forced to stand in the corner or sing I’m a Little Tea Pot.  And be sure to eat all of your vegetables!

It is always fun to stop and take in the details of each park rather than dashing from one attraction to another.  One form of entertainment in the Studios that my whole family loves is the “Streetmosphere.”  These are characters from vintage Hollywood all with different roles—Starlets, Agents, News Reporters, Directors, Police Officers, you name it!  And the put on shows in various portions of the park, usually on Hollywood Boulevard or Sunset Boulevard.  Sometimes they are just part of the crowd interacting and entertaining.  One day I remember one of the characters standing in the middle of Hollywood Boulevard trying to hail a ride on a taxi (strollers going by).  It was fun to watch him get smiles from the families headed in for a day of fun. Despite the newer Toy Story attractions, I think Toy Story Mania is a perfect family attraction and a great reason to visit and love Hollywood Studios.  Toy Story Mania puts 2 players together to whirl around the track scoring points in various types of virtual 3D midway games.  It fosters a nice competition between participants since you can all compare scores at the end, but it also benefits you to work together to clear certain items from the games to earn chances at higher point values.  It is a fun game for kids of all ages (as long as they can reach the gun to play.  A day at Hollywood Studios isn’t complete without a ride on Toy Story Midway Mania.

Why does your family love Disney’s Hollywood Studios?