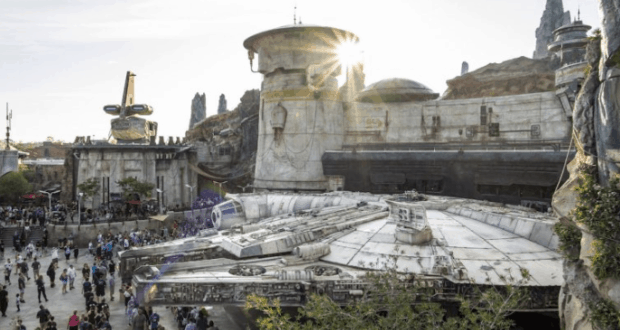 It finally happened! What seemed like so far into the future has finally come to be, and Star Wars fans couldn’t be more thrilled! Yes, Star Wars: Galaxy’s Edge has finally opened at Walt Disney World, and Guests from this galaxy can travel to Batuu in a galaxy far, far away. But Galaxy’s Edge is just the beginning of the excitement in store for Star Wars fans when they walk through the gates at Walt Disney World! Here are 10 must-do (and must-have) experiences for the Star Wars fan at the Most Magical Place on Earth.

At Star Wars Launch Bay at Disney’s Hollywood Studios, fans of the franchise can meet Kylo Ren—the only son of Han Solo and Princess Leia. Ren has pledged his allegiance to the Dark Side, and you can feel the power of the Dark Side when you enter his quarters to meet him. Pose for photos with the Commander on the Bridge, but don’t overstay your welcome!

Also at Star Wars Launch Bay, fans of the Star Wars franchise can meet the lovable, huggable Chewbacca. The Wookie on Base meets Guests and poses for pictures with them. While you’re there, ask him for pointers on piloting the Millennium Falcon!

After you’ve met Kylo Ren and Chewbacca, don’t forget to stop and scan in when you meet the friendly droid BB-8. He’s an interactive little guy and if you pay attention, he’s got a lot to say. (Here’s hoping you speak droid!) He also takes photos with Guests, so don’t miss your chance to interact with this adorable droid and get a photo to share with friends!

Also at Disney’s Hollywood Studios is Star Tours: The Adventure Continues. In this simulation-type attraction, you and your family can board a Star Speeder 1000 and set out on a journey through the galaxy. Just be sure your pilot has the right experience! At times, C-3PO gets caught at the controls just before take-off, and though he has no experience in flying a Star Speeder, he finds himself the pilot of the enormous craft. There are several adventure tours offered at Star Tours, and you never know which one you’ll be on board for! Hold on tight as C-3PO does his best to fly the Star Speeder through the galaxy. Enjoy thrilling dips, turns and near-misses with all kinds of debris, creatures and other spacecraft!

5. Have an encounter with a Stormtrooper

Inside Star Wars: Galaxy’s Edge, at Star Wars Launch Bay and in Animation Courtyard at Disney’s Hollywood Studios, you can see Stormtroopers patrolling the area. From time to time, they will stop and interact with Guests, but don’t expect a long encounter; the Stormtroopers are on a mission, and they don’t have lots of time for civilians. (But it’s really cool when they point you out and have something to say! Don’t forget your light saber!)

Inside Star Wars: Galaxy’s Edge, you can reserve your spot at the Droid Depot where you’ll be able to make your very own droid to take home with you when you leave Batuu. The little droids can be pricey, so visit Disney World’s official website for information on the Droid Depot before you visit.

Not sure you want to make a droid to take home with you as a souvenir from your Batuuan trip? No worries! Maybe you’d feel more in your element by crafting your very own light saber to take home with you! Choose your side—Light Side or Dark Side—and be creative. Make a light saber like the one wielded by your favorite Star Wars character or be creative and make a one-of-a-kind saber! The choice is yours!

2. Experience The VOID at Disney Springs

The VOID is a thrilling experience that’s difficult to describe to someone who hasn’t yet enjoyed it. Imagine a place where the latest technology, special effects and interactive sets combine to give you a spectacular virtual reality experience. Don’t just watch an army of Stormtroopers; step into THE VOID and become one!  You can look at your hands and thanks to the virtual reality glasses you’re wearing, you appear to be suited up just like a member of the First Order—even down to the gear on your hands. Feel the heat as you walk over lava pools. It’s amazing! Visit www.theVOID.com to purchase tickets for the experience at Disney Springs!

1. COMING SOON – Experience the Rise of the Resistance

Beginning in December of this year, visitors to Batuu at Star Wars: Galaxy’s Edge will get to experience the second attraction inside the new 14-acre expansion! The Rise of the Resistance attraction will have Guests boarding the 8-passenger First Order Fleet Transport and will put Guests in the middle of the action in a battle between the First Order and the Resistance. It will be like four attractions in one, and we can’t wait to experience this all-new attraction!