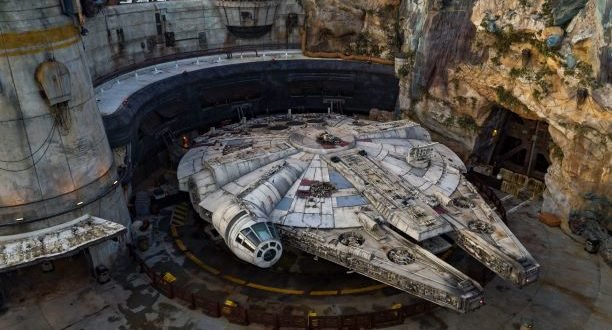 The newest addition to Disney’s Hollywood Studios is Galaxy’s Edge where guests can travel to the Black Spire Outpost on the planet Batuu and become fully immersed in the battle between the First Order and the Resistance.  The most popular experience in Galaxy’s Edge at the moment is Millennium Falcon: Smuggler’s Run, a thrilling attraction that lets guests actually board the famous ship and become part of a special mission for the Resistance. Each guest who steps into the cabin of the Millennium Falcon is given a job for the adventure, and while they all are amazing, being one of the two pilots is absolutely mind blowing as you get to actually control the ship!

2. Enjoying A Drink at Oga’s Cantina

Another mind blowing experience in Galaxy’s Edge allows guests to step inside an iconic location to enjoy some out of this world concoctions. Oga’s Cantina is a rocking location that is open from park open to close each day and features all sorts of interesting items, characters, and even the beloved droids Rex as DJ. Guests who score a seat at the bar in Oga’s Cantina can enjoy otherworldly alcoholic and nonalcoholic beverages inspired by all sorts of things in the Star Wars universe including the Jedi Mind Trick, Jet Juice, Fuzzy Tauntaun, Blurrgfire, Black Spire Brew, and Carbon Freeze.

Sunset Boulevard in Disney’s Hollywood Studios is home to some of Walt Disney World’s biggest thrills including the Rock ‘n’ Roller Coaster Starring Aerosmith. After finding themselves invited personally by the band to a concert across town, guests zip through neon lights in the darkness to make it to the show on time. In addition to the pumping soundtrack and several inversions, the most mind blowing moment of the attraction is the launch where gusts rocket from zero to sixty in mere seconds!

4. Seeing Ghosts on The Twilight Zone Tower of Terror

Another big thrill on Sunset Boulevard is The Twilight Zone Tower of Terror which invites guests into the Hollywood Tower Hotel where five guests disappeared mysteriously years ago. The attraction brigs guests to The Twilight Zone on a maintenance service elevator and features random drop sequences that differ each tie for unique experiences. While the drops and setting are eerie, the most thrilling part of the attraction is seeing the five ghostly figures suddenly materialize right in front of guests’ eyes beckoning them to join them!

There are several fantastic dining options to choose from in Disney’s Hollywood Studios, but the most immersive option actually transports guests to a unique dining area. The Sci-Fi Dine-In Theater Restaurant is open daily for lunch and dinner and brings guests into the middle of a drive-in theater in the 1950s. Complete with darkness, scenery suggesting the outdoors, and classic cars converted into tables facing the screen, guests can kick back and enjoy some American classics while watching sci-fi clips and shorts from the 1950s. Guests are sure to have their minds blown when they step out of the Florida sunshine and into the Sci-Fi Dine-In Theater Restaurant!

6. Transforming Into A Toy

In addition to Galaxy’s Edge, the other new area of Disney’s Hollywood Studios is Toy Story Land where guests can enjoy attractions and favorite characters from the Toy Story franchise. While the land is filled with wonderful experiences, the most mind-blowing one is when guests first enter into the area and see a larger than life Woody waiting to greet them. This entrance into Toy Story Land is so amazing as guests truly feel as though they have magically shrunken don to the size of a toy and entered into Andy’s backyard, complete with massive other toys such as Legos, Green Army Men, and more.

Toy Story Land is home to three attractions, the most thrilling of which brings guests on a ride on a favorite character. Slink Dog Dash is a roller coaster designed by Andy himself which twists and turns through the backyard offering some thrills and amazing views of the area. The best part of Slinky Dog Dash is the two separate launches where guests reach high speeds in a matter of seconds before rocketing around the track. Slinky Dog Dash is the only attraction in Walt Disney World to feature two launches, and guests absolutely love them!

The other mind blowing experience in Toy Story Land that guests absolutely love to enjoy can be found at Toy Story Mania. This family friendly attraction brings guests into a midway game that the Toy Story characters found and set up including several 3D games where guests have to point and shoot at various targets. With lots of fun interactive elements and character interactions, Toy Story Mania is sure to thrill guests with its fun and competition for the high score!

9. “Under the Sea” on Voyage of the Little Mermaid

Disney’s Hollywood Studios is also home to some fantastic live entertainment including a stage show that brings the story of Ariel to life in new ways. Voyage of the Little Mermaid retells the story of Ariel’s adventures through an innovative combination of animation, live acting, special effects, and more. While the entire show is incredible for guests of all ages, the most amazing moment is hen Sebastian and friends come out in puppet form with special black lights to sing the classic “Under the Sea.” Each guest will be sure to find themselves singing along to this unforgettable performance.

Perhaps the most mind blowing way to end time spent in Disney’s Hollywood Studios is enjoying the park’s nighttime spectacular. Fantasmic! tells the story of Mickey battling evil forces in his imagination and brings the adventure to life with music, special effects, Disney characters, and more. Featuring many impressive moments such as Mickey battling Maleficent in dragon form and Steamboat Willie steering his classic ship, the biggest thrill of the show is the finale when Mickey magically transports himself from the top of the mountain to the main stage with a special burst of fireworks!