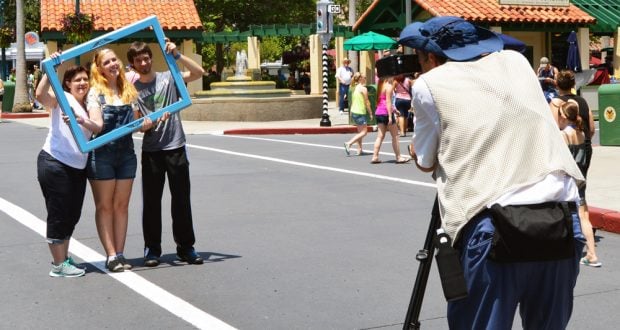 Any day in a Disney Park is going to be stupendous. And whatever you choose to do in Hollywood Studios will be magical and exciting. But there are some essential experiences you must have at least once at this movie-themed park. Here are ten of my picks:

1. Snap a Picture on Hollywood Boulevard

Perhaps the second most famous street in all of Disney World, Hollywood Boulevard greets guests into Hollywood Studios with pride. The old fashioned movie-set-styled street is full of glittering storefronts and bustling guests. At the very end of the street sits the Chinese Theatre, a perfect replica of the real Grauman’s one in California. This makes for an absolutely gorgeous and glamorous shot!

2. Dream with Mickey in Fantasmic!

In my humble opinion, Fantasmic! is one of the best fireworks shows in Disney. The show centers on Mickey’s dream and the classic villains vowing to turn it into a nightmare! Using water projection and pyrotechnics, this show is a feast for the eyes. It’s completely theatrically impressive, but also super fun because you get to see all your favorite Disney pals! This is a must for Hollywood Studios. I mean, who wouldn’t want to be a Toy for a day? Guests flock to this new part of the park. The entire section is oversized and covered in color to make you feel like a toy in Andy’s backyard. With rides like Alien Swirling Saucers, Slinky Dog Dash, and Toy Story Mania! you’ll have lots to do! Plus there are fun dining options and character opportunities that are not to be missed!

Here you’ve got two to choose from, and you can’t go wrong with either. The fun doesn’t stop when the sun goes down here at Hollywood Studios! The two amazing nighttime spectaculars are Disney Movie Magic and Star Wars: A Galactic Spectacular. Both tell spectacular stories using projections right on the Chinese Theatre! This is such a fun way to close the day at Hollywood Studios.

5. Ride Tower of Terror at Night

The Twilight Zone Tower of Terror is just a must to begin with. But riding at night makes it extra spooky! This ride is definitely a must for thrill seekers. After going through the elaborately themed story of the hotel and its history, you board an elevator that goes way, way up – and then way, way down. This is a 13 story drop and worth all the screaming! Make sure to open your eyes at the very top: it’s a great view of the Park. 6. Be the Rebel Spy on Star Tours

Uh-oh! We have a stow-away! C3-PO and R2-D2 get into some trouble when they accidently take a Star Tours shuttle out for a spin. The good news is you all get to see some really cool places around the Star Wars universe, like Endor and Jakku. The bad news is that you might run into some unfriendly faces, like Darth Vader or Kylo Ren. And if you’re the Rebel Spy, you’ll get your picture on the screen and a message from the bad guy! But I’m sure C3-PO will get you out of there…

7. Take in the Classic Attractions

Hollywood Studios is reimagining itself right now, which is awesome. But a lot of us remember and miss MGM. A must for me in Hollywood Studios is going to all the classic attractions and reminiscing. You have to laugh with the Muppets in Muppet*Vision 3D. Or learn the tricks and stunts from Indiana Jones in the Epic Stunt Spectacular. Or experience a tale as old as time in Beauty and the Beast: Live on Stage. Or just walk around the Chinese Theatre courtyard to find all the famous hand and footprints. The new stuff is awesome, but the old gems are magical too.

8. Dine at the Brown Derby

For me, this is a must much more for the atmosphere than the food. While the menu is pretty incredible – Sweet Corn Bisque and Char-Grilled Filet of Beef and Black Grouper and Lobster Cioppino – the actual dining room is hugely impressive too. The Brown Derby in Hollywood Studios is an authentic replica of the real one, right down to the caricatures of celebrities on the walls. A must for glitz and glam fans! 9. Scream in the First Seat on Rockin’ Rollercoaster

Dream on, you say? No way! Rockin’ Rollercoaster is probably the most intense rollercoaster in all of Disney. It is not for the faint of heart, but oh so fun! With a soundtrack by Aerosmith, how could it not be? Anywhere you sit on this ride will be worth it, but front row takes it up a whole new level! You’ll be doing corkscrews and nosedives and jolting around corners in the best seat in the house!

10. Chat with the Citizens of Hollywood

Part of the charm of Hollywood Studios is the old-time, classic feeling of the park. The Citizens of Hollywood absolutely do that for me, so taking some time to hang out with them is a must. This improv acting troupe looks like they just stepped right out of a 1920’s film. They’re silly and loud and full of surprises! They generally just wander about and make friends with people around. But they have their set shows and often use audience participation!