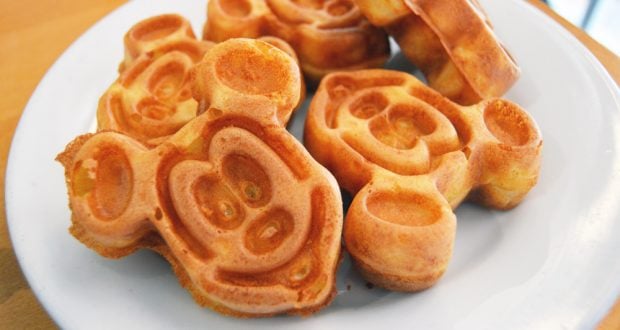 When I make my annual pilgrimage to Walt Disney World, I look forward to the attractions, the character interactions…and the food. Most Disney fans would agree that half the fun of visiting the parks is getting to enjoy yummy treats you can’t find anywhere else. Here are 10 of the most beloved Disney treats, and we dare you to think about these without getting hungry!

By far my favorite Disney World indulgence, this tropical treat never ceases to refresh on even the hottest of Florida summer afternoons. Found at Aloha Isle in the Magic Kingdom’s Adventureland (or you can also find them at the Polynesian Resort), the Dole Whip is a tropical twist on a root beer float that’s comprised of pineapple juice with vanilla, orange, or pineapple soft serve.

Sure, you can find soft pretzels at baseball games and carnivals, but there’s something especially whimsical about the Mickey-shaped soft pretzel. Crispy on the outside and chewy on the inside, there’s no better salty snack to help your body refuel after an early morning at the parks.

While not shaped like The Mouse, churros are another popular sugary treat found at various carts throughout the theme parks. These deep-fried, cinnamon sugar sticks are light, crispy, and just satisfying enough to tide you over until your dining reservation at Liberty Tree Tavern or Akershus.

Truth be told, turkey legs aren’t one of my personal favorite snacks…but it’s hard to imagine Walt Disney World without thinking of the massive turkey legs that guests are often seen chomping while standing in line for Big Thunder Mountain Railroad or anxiously awaiting the start of Fantasmic. They’re filling enough to serve as a meal, and let’s face it—they’re fun to eat.

Another Mickey-shaped favorite, there’s something about the rice krispie treats at Walt Disney World that are especially satisfying. You can find these in various bakeries throughout the parks as well as in retail locations like Goofy’s Candy Company at Disney Springs. The best part? The already delicious gooey marshmallow treats are adorned with an assortment of sweet toppings, from chocolate and sprinkles to peanut butter chips and crushed Oreos.

I’d be remiss if I attempted to compile any list of Disney treats without a mention of the classic Mickey Premium Ice Cream Bar. Thanks to Florida’s year-round heat (and humidity!) it’s no wonder that park-goers’ favorite indulgences revolve around ice cream and other frozen delights. Sure, it’s pretty much just vanilla ice cream with a chocolate coating (not unlike your typical Klondike bar), but food shaped like Mickey just tastes better—simple as that.

A breakfast staple at some of the most popular Disney restaurants, from Ohana to Chef Mickey’s, the Mickey waffle is in a class of its own for a Disney-themed twist on a classic everyday food favorite. I don’t know how they do it, but I’ve never tasted a waffle quite as scrumptious as the Mickey waffle…and not just because it’s the ultimate not-so-hidden Mickey amongst the everyday eggs and bacon on my breakfast plate.

In the interest of full disclosure, I have yet to try this one—namely because it’s a treat best enjoyed by larger groups and, truth be told, its gargantuan size still intimidates me. But the Kitchen Sink at the retro-themed soda shop Beaches and Cream at Disney’s Beach Club is the ultimate ice cream sundae that includes eight scoops of ice cream. And, yes, you read that correctly. Eight. And that’s before you consider its massive heap of toppings, which range from hot fudge and bananas to Oreos and brownies, and pretty much every other ice cream topping you could possibly imagine. If this isn’t enough of a sugar high to power you through the rest of your Disney World vacation, I don’t know what is.

A delicacy that can only be found at the Walt Disney World resort (namely Be Our Guest restaurant in the Magic Kingdom), this Beauty and the Beast-inspired creation mentioned in the song “Be Our Guest” is essentially a cookies-and-cream flavored mousse served atop a chocolate cupcake at the restaurant. On your next trip to The World, be sure to try the grey stuff (it’s delicious)…if you’re lucky enough to nab a table at the Magic Kingdom’s most popular table service restaurant, that is.

Another can’t-find-anywhere-else-except-Disney type of treat are the Croque Glacés found at L’Artisan des Glaces in Epcot’s France pavilion—a pressed ice cream sandwich in a Brioche bun. Is there a more satisfying combination than ice cream and bread? You can select your favorite flavor of rich ice cream and a sweet sauce, like raspberry or chocolate, and watch as its pressed into a fluffy Brioche roll for the ultimate ice cream sandwich that’s both cold and sweet and warm and savory at the same time.