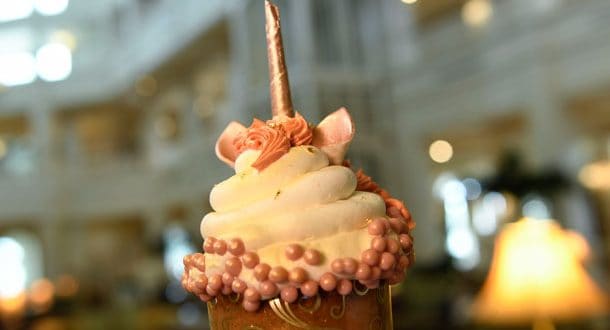 There are a lot of people who consider themselves Disney World food connoisseurs—and sometimes more specifically Disney World dessert connoisseurs! And it’s no wonder—with all of the decadent desserts and sinful snacks available in the theme parks and resort hotels, anyone could make a job of simply sampling all those tasty treats! Take, for example, Disney’s infinite list of cupcakes—not just chocolate and vanilla—but chocolate and vanilla with all the sweet additions, including some amazing creativity! You can sample cupcakes that look like Disney characters, fictional animals, flowers and even a pile of spaghetti! Here are 10 of the best cupcakes Disney World has to offer—but this list is by no means all you’ll find! It’s just a hint!

You won’t see this cupcake on the menu, but it is sold at the Sunshine Seasons food court inside The Land pavilion in Future World at EPCOT. The cake is vanilla and Nutella chocolate marble. The frosting is a vanilla buttercream with cream cheese, and Minnie’s ears are fondant. Beautiful and yummy! This cupcake is also found at the Sunshine Seasons food court and resembles a cute flower pot with yellow and orange marigolds growing. Green frosting is used for the “grass” and “leaves,” and everything is edible!

Find this decadent cupcake at the Trolley Car Café at Disney’s Hollywood Studios—it has stood the test of time! This cupcake has been around since 2009. It’s chocolate cake filled with chocolate fudge and topped with a mound of vanilla buttercream that is covered in crushed pieces of a Butterfinger candy bar. You know it’s good if it’s been in the parks for this long!

To celebrate EPCOT’s 35th anniversary in 2017, Disney foodies created the Spaceship Earth cupcake—complete with an edible half of the silver iconic sphere on top! It’s filled with strawberry filling, and the half-sphere is surrounded by confetti sprinkles. The cupcake itself is yellow cake and most of this dessert is cake, not frosting, so if you’re more into your frosting than your cake, you might pick another more heavily-frosted confection! The Backlot Express restaurant at Disney’s Hollywood Studios has the cupcake lover/Star Wars fanatic covered! Choose your side and order your favorite character. The BB-8 cupcake has lemon-flavored frosting, chocolate candy rocks and an edible BB-8 on the top. The Darth Vader cupcake is a chocolate cake with chocolate fudge and chocolate peanut butter filling. It’s topped with chocolate curls and an edible Darth Vader. There’s even a BB-E9 cupcake (he’s the one that looks like BB-8, but with black metal). Choose your side, and we won’t tell—you’ll be eating all the evidence anyway!

This is yet another occurrence of the fabulous rose gold that has taken Disney World by storm! It has rose gold sponge cake and hazelnut cream cheese filling. It even has an edible unicorn horn and ears. Find this fun cupcake at the Gasparilla Island Grill at Disney’s Grand Floridian Resort and Spa.

4. Any cupcake in the case at Sprinkles

Literally any cupcake you order at Sprinkles at Disney Springs will have you walking on air for the next several hours. Like Disney, Sprinkles doesn’t make a bad cupcake! Take your pick or order one of each!

Sit back and reminisce about the “tale as old as time” when you enjoy this delightful cupcake! Simply called the “Belle” cupcake, it’s vanilla cake with yellow buttercream (to match Belle’s beautiful dress from Disney’s Beauty and the Beast) and a gorgeous red rose on top. You can find this very elegant cupcake at the Confectionery on Main Street U.S.A. at Magic Kingdom. This cupcake list wouldn’t be complete without a mention of our favorite Mouse guy! And this cupcake is cute to boot! Find it at the Boardwalk Bakery at Disney’s Boardwalk Resort. It’s chocolate cake with white frosting and edible red beads sprinkled around the sides. The best part is the Oreo cookie, dipped halfway up in red icing/gel/fondant. It has two yellow dots of frosting, to represent the buttons on Mickey’s red pants. There are even two edible chocolate circles that make Mickey’s ears. It’s almost too cute to eat. Almost.

I know—at first it sounds disgusting. But this cupcake has got to be one of the most creative I’ve seen among Disney’s offerings! You can only find it on the kids’ menu at Mama Melrose’s Ristorante Italiano at Disney’s Hollywood Studios. It’s chocolate cake with vanilla buttercream used to make the pile of spaghetti “noodles” on top. Strawberry sauce is poured over the noodles to represent the tomato sauce. And then the cupcake is topped off with a big chocolate (meat) ball! Be sure to ask for a kids’ dessert menu when you visit Mama Melrose—she’ll know just what you’re looking for! 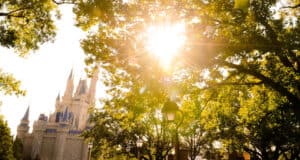