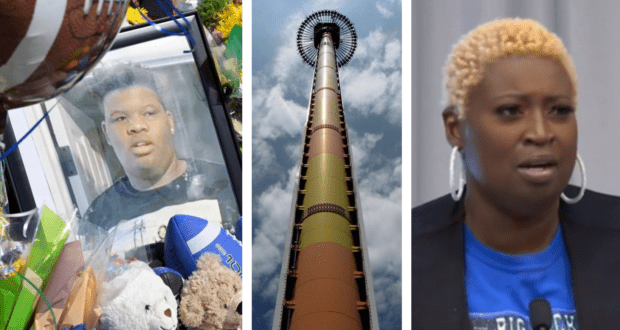 “You stripped me of my son”: Mother of 14-year-old who fell to his death at drop tower ride finally speaks publicly

The mother of the 14-year-old teen who fell to his death at the Orlando FreeFall drop tower ride at a Florida amusement park in March has spoken out today for the first time since her son’s death.

Nekia Dodd, mother of Tyre Sampson, who fell from the Orlando FreeFall ride at ICON Park in Orlando spoke publicly today in St. Louis, Missouri, for the first time since her son died on March 24. Sampson was in Orlando with friends during spring break when he visited ICON Park, an amusement park on International Drive in Orlando.

Tyre Sampson slipped out of the restraint in his seat on the ride and fell hundreds of feet to the ground below. Emergency personnel arrived and transported Sampson to a local hospital where he succumbed to injuries sustained from his fall.

On Tuesday, Nekia Dodd, and her attorney, Michael Haggard, spoke at a news conference in downtown St. Louis about Ms. Dodd’s son’s death. Nekia Dodd referred to Tyre Sampson, her 14-year-old son, as her “personal teddy bear,” and called the boy a “gentle giant.” She continued by describing Sampson as a go-getter and said he was a very loving person.

Ms. Dodd said that when she received the phone call, telling her about her son’s fall, her concern was making sure there was someone to be with her son and comfort him because she was unable to be with him. She said the last time she saw her son alive was when he returned home to get his charger before leaving for Orlando.

“Oh you come back to give me a hug,” she described herself saying to Tyre Sampson. “I actually said ‘my last hug.'”

“As [Tyre was] backing out my door, he turns around and says ‘I’ll see you Saturday or Sunday,'” explained Dodd. “That was my last time speaking to my son. And that Sunday I was waiting for my son to come home. Because that’s what he told me. So to get a call to say he’s not coming back.”

Nekia Dodd says her son’s death “is a nightmare.” Ms. Dodd and her attorney held the news conference after filing a civil suit in Orange County, Florida, on Monday. The suit names Funtime Thrill Rides, the ride and seat manufacturer of the Orlando FreeFall drop tower ride, Slingshot Group, the owner and operator of the drop tower ride in Florida, and ICON Park, where the ride was located; ICON Park is also the entity which leased the space to the owner and operator of the ride.

According to the 65-page lawsuit, the ride‘s operators should have known that riders could be “subject to unreasonably dangerous and foreseeable risks, and that serious injury and death of the occupants in the ride could result.” Most freefall rides feature a shoulder safety harness and a seatbelt, but the Orlando FreeFall drop tower ride had only an over-the-shoulder safety harness. There were no seatbelts on the ride whatsoever.

During Tuesday’s news conference, Dodd’s attorney, Michael Haggard reiterated that the death of Tyre Sampson could have been prevented had there been seatbelts on the ride. Mr. Haggard also stated that the operator of the ride neglected to post warnings about proper height and weight restrictions for potential riders.

“In their manual, it says no one can ride this ride if they are over 287 pounds,” said Haggard.

“Somebody manipulated the seats, somebody changed the size of this harness and what it can fit. So the question is who did that, when did they do that and who directed it?” Haggard asked during the news conference. 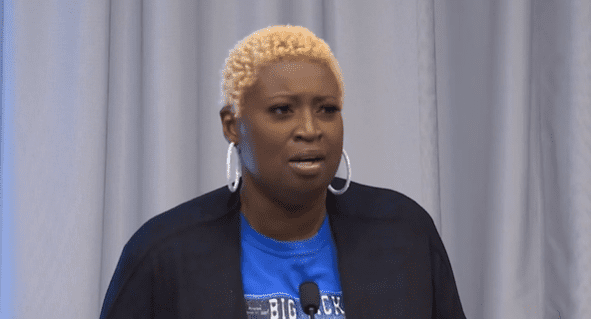 “It’s disgusting,” Ms. Dodd said. “So it’s like, you didn’t want to miss a dollar, but you stripped me of my son. Yeah, it’s disgusting.”