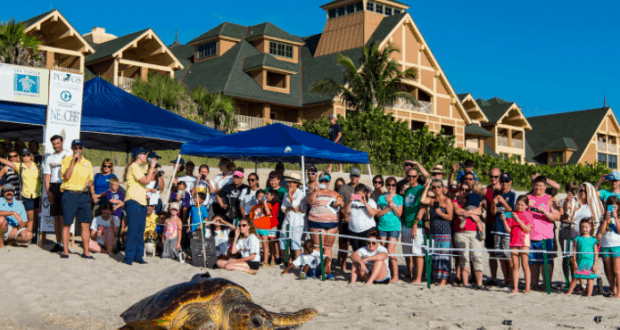 Disney’s Vero Beach Resort, located a couple hours away from Walt Disney World will be hosting their 11th annual Tour de Turtles event. The event is scheduled to take place at the resort on July 28th, 2018.  For this spectacular event, the resort will team up with Disney’s Animals, Science & Environment Team and the Sea Turtle Conservancy in order to celebrate two loggerheads’ great migration and track their journey from nesting on the beach to their foraging grounds. There is turtle nesting activity that takes place on the beach around Disney’s Vero Beach Resort for several miles, which makes it one of the most active sea turtle nesting areas in all of Florida.

Disney Parks Blog is sponsoring the event and is giving guests the chance to vote for their favorite Toy Story names for the two turtles that will be released.  The name selections include Jessie, Bo-Peep, Trixie and Mrs. Potato Head.  Guests can click here to head over to Disney Parks Blog and place their vote.  Soon there will be an announcement of the names as well as live stream of the event.

Which names would you pick for the two turtles?