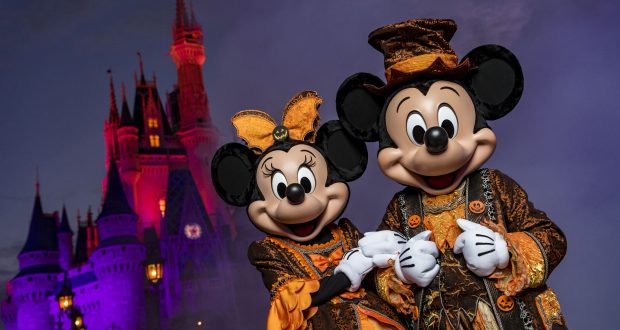 Who Would the Disney Characters Dress Up As For Halloween?

The big question on every kid’s (or kid at heart’s) mind when fall rolls around is: “What should I be for Halloween?” I think the Disney characters have this dilemma too. There are so many Disney dress-up opportunities that it’s hard to narrow them down! These are just some of my imaginings for All Hallow’s Eve:

1. Lilo and Stitch as Black Widow and the Hulk

The more I think about this, the more I am absolutely sure that Lilo and Stitch would dress up as Black Widow and Hulk for Halloween. I think they’d be their idols. Lilo is such a budding little feminist that she’d totally look up to Black Widow/Nat. And as her right-hand man, Stitch would be all over being the Hulk. Lilo might have a hard time painting him green, but they’d be the best duo!

Pluto would absolutely be Sven. Both have similar temperaments and playful mannerisms. All Mickey would have to do is strap a pair of antlers on Pluto and be good to go. I can see Pluto prancing around from door to door, maybe with a carrot chew toy in his mouth. He could even pull a sleigh behind him to hold all his candy! This seems so right, doesn’t it? I think Mickey would love to honor his creator. All he’d need is a nice pair of trousers, a black vest, and a little mustache! He’d be the cutest ever. I wonder if he’d carry around a little stuffed animal of himself? Whatever he wore, he’d be sure to bring smiles and magic to every house he visited. 5. Moana as Maui and Maui as Moana

Moana and Maui would totally take Halloween as a way to joke with each other. I can see it now: “What are you going to be for Halloween?” “Oh, you’ll see…” Moana would absolutely get one of those tattoo shirt/sleeves and Maui would get a giant red sheet to drape over himself. They’d have a ball trick or treating, laughing the whole night away.

6. Rapunzel as Vanellope, Flynn as Ralph, Pascal as Felix, and Max as the Car

Rapunzel would be the orchestrator of this costume set. Flynn would protest 100%, but eventually cave because he loves her. Max and Pascal would be roped in too, obviously. Rapunzel would love Vanellope because of how colorful and fun she is! She’d force Flynn into a muscle suit for sure. Pascal would have a cute little blue suit and hat and Rapunzel would paint Max to look like Vanellope’s racecar! They’d look amazing! 7. Huey, Duey, and Louie as The Three Caballeros

The obvious choice, right? These three troublemakers would make great Caballeros. They could easily get matching outfits and giant sombreros and little guitars. Maybe their Uncle Donald could give them some pointers!

Sometimes Halloween is a night to dream! I think Goofy would totally dream of being big and strong and the hero! Goofy would absolutely act the part. With a red spandex suit and a mask, Goofy would knock on every door in the neighborhood, asking if anyone needed saving – or more candy! Maybe he could even rope Max into being Dash! If Halloween costumes mirror personalities, this one is right on the money. Minnie is such a joyful character, always happy to help her friends and be positive! She’d be an adorable Joy. She could wear a sweet little yellow dress with a spiked blue wig. Although, I’m not sure how that would work with her ears….but I’m sure she’d figure it out!

I’m not sure if Daisy could pull off the accent, but she could definitely make a Merida costume work! All Daisy would need is a silk blue dress, a crazy ginger wig, and a bow and arrow! I could totally see her walking up to every house and holding up her bow instead of saying “Trick or treat!” Maybe Scrooge McDuck could give Daisy some Scottish lessons! I think Hiro and Miguel have a lot in common. They’re around the same age, both incredibly determined, and they love their families. Hopefully Hiro wouldn’t try to be too cool for Halloween. He could totally pull off Miguel with just a red hoodie and some face paint! Although I have a feeling Baymax would be a bit concerned about Hiro’s sugar intake the whole night…

Olaf has a great sense of humor, so he’d have fun with any Halloween costume he came across, but I think he’d go for the sun. Just a big foam or cloth costume of the sun. I can absolutely picture him as a giant yellow ball waddling around Arendelle asking for candy. It’d be hysterical.