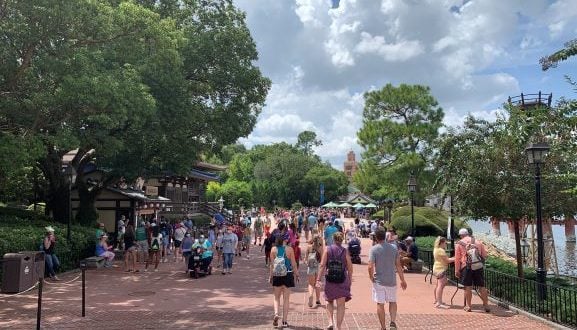 Since Walt Disney World reopened back in July we have enjoyed low crowds and short wait times. I’m a local Annual Passholder, and I’ve been back at the parks quite a bit. I’ve noticed a difference in the crowd levels between the weekdays and the weekends. There was something that we hadn’t hit yet, though, and that was a holiday weekend. Then Labor Day weekend rolled around, and the Orlando area sprung alive like we have not seen in months.

On Saturday, September 5, the four Walt Disney World theme parks all hit capacity. It was the first time that no reservations were available. Disney Springs hit capacity as well. Nearby Universal Orlando Resort also hit capacity at its three parks, and at CityWalk. On Saturday my daughter went to SeaWorld Orlando. I don’t know if it also hit capacity, but she told me that it was the most crowded she has seen it since it reopened. She also said that people ignored the social distancing markers, and that many disregarded the face covering rule as well. I already knew that Walt Disney World was taking its guidelines more seriously than SeaWorld, and I was curious as to what capacity would look like. When I was able to get a last minute Disney Park Pass reservation for Sunday September 6 at Epcot, I grabbed it.

I showed up at Epcot a couple of hours after the park opened for the day. I figured that would be a good time to experience the crowd level. There was an electronic sign outside of the toll plaza letting people know that a reservation was required to enter the park, and that all reservations for the day were gone. I had never seen that sign before! (I drove by Disney’s Animal Kingdom on my way home, and there was a similar sign there.) Sometimes the Cast Member at the toll plaza will ask if I have a reservation, but not this time.

The parking lot was visibly fuller than I’ve seen it before. They are still staggering parking, and I was in the group that was filling in the spots. I parked in row 14, which doesn’t seem too far until you realize that it’s in Discover, which is the second lot. Journey is closer. That’s not a complaint, I don’t mind walking, and I rarely took the tram when it was running. It’s an observation to show that there were more cars than I’ve seen at Epcot in months. Create, which is across from Discover, also had cars parked far back.

I showed up late enough so that there was no wait to get in. I was right through Temperature Check, Bag Check, and scanned into the park. There were no lines at any of these areas.

The first place that I noticed a difference in the crowd level was when I approached Spaceship Earth. The line wound around through a good part of the outdoor queue. The posted wait time was 45 minutes, and I believed it. I checked again later in the day and the line was half the size. A good part of the first line was probably people who had ridden the park’s most popular rides, and then headed to Spaceship Earth.

Around World Showcase there were lines at most of the Festival Marketplaces. I noticed that both Spain and the Alps were open, they were closed when I was at Epcot a few days ago. Even though there were lines for the booths, they were manageable, and people were social distancing.

The longest line that I saw all day was for Frozen Ever After. The posted wait time was I believe 90 minutes, and the line went all the way into Japan. During the middle of the day the times for all the rides were higher than I’ve seen since July 15, but they were nowhere near the pre-closure weekend times.

Since I was curious about Wait Times, I decided to time one by riding Soarin’. The posted time was 45 minutes. At first the line looked like it might be that long, but then it started to move. 32 minutes and 1 second later, I was getting off. I have a feeling that some of the other posted wait times were high as well.

I took a few pictures as I walked around World Showcase. In some of them it looks like it was wall to wall people, but the pictures don’t always tell the whole story. Most of the guests were doing a great job of keeping distance between parties. I only saw a couple of people try to slide by the face covering rule, and fortunately Cast Members saw them as well. There were a few people who didn’t seem to know the meaning of the word “stationary”, but even they were staying a safe distance from others.

The only place where there was no social distancing was after I got off of Soarin’. Instead of getting off in an orderly fashion and walking in groups towards the exit, the parties just walked together. It continued through the sitting area, and then stopped at the up escalator. There were probably 25 people standing at the bottom of the escalator, and there was no distance between them. They also blocked the escalator, so that those who wanted to ride up or use the stairs could not get there without cutting through the crowd. Even though this was annoying, it showed me just how well social distancing was working in the rest of the park.

I watched the JAMMitors in the America Gardens Theater. It’s a great show, there is so much energy! The theater was mostly empty, there were probably less than 50 people watching. If you’re at Epcot make sure you check them out. You can sit down for a few minutes in the middle of the day, and you will have a fantastic time.

We don’t know what capacity is at Walt Disney World. Whatever the current number is, there was still plenty of room at Epcot, and the crowd was well controlled. I know that a lot of the people were in lines, either for rides or for food, but I felt safe throughout the park.

2020-09-07
PaulaK
Previous: Remember When… Thinking Back to a Walt Disney World Before COVID-19
Next: A Heavenly Dole Whip Cupcake Recipe