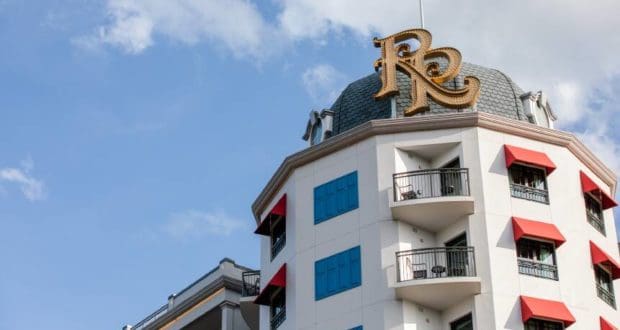 The newest Disney Vacation Club property is open. Disney’s Riviera Resort is the first standalone DVC resort at Walt Disney World since Disney’s Saratoga Springs Resort opened back in 2004. The new resort features the themes of the French and Italian Riviera. There are also plenty of extra touches that only Disney can provide.

On December 16, I was invited to attend the dedication ceremony, which was also covered live by Disney Parks Blog. We were given the opportunity to speak with several of the people who were involved with bringing this beautiful new resort to fruition. We also got to enjoy a sneak peek inside the most intimate and the largest suites that the resort has to offer.

The dedication ceremony started with musicians, performing Italian classics as well as Disney tunes. We then heard a bit about the resort itself. Perhaps the highlight of the dedication was the appearance of four Disney favorites, wearing their new costumes. Since the European Riviera is known for the arts, the four characters are artists. Donald is a sculptor, Daisy is a dancer, Minnie is a poet, and Mickey is a painter. We got to experience one of Minnie’s poems.

If you want to see these classic characters in their Riviera costumes, make a reservation for breakfast at Topolino’s Terrace. It is a brand new signature restaurant that is open for breakfast and dinner. There aren’t any characters at dinner, but you’ll still want to dine there. The food features house-made pastas and other Italian flavors, as well as dishes with a French flair. The view is also incredible. This is rooftop dining, so plan your dinner around the fireworks. There are clear views of Disney’s Hollywood Studios and Epcot. You can even see Disney’s Animal Kingdom in the background, including the Tree of Life.

Topolino’s Terrace is not the only dining option at Disney’s Riviera Resort. Grab a pastry and your morning coffee at Le Petit Café. Primo Piatto is a counter service option that features all three meals, and Mobile Ordering is available. Bar Riva is a pool bar, but there is a little bit of a twist. You do not need to be at the pool to order from it. You can sit in a covered area, out of the sun, and order something to eat and a beverage. If you’re at the pool, don’t worry, poolside service is available as well.

Recreation is a fun part of Disney’s Riviera Resort. You can work out in Athletique Fitness Center, but that is not all. The new resort offers yoga, a fun run of over a mile, bocce, and a unique scavenger hunt that is centered around Disney’s Skyliner. The main pool features a two story slide. There is also a water play area for the kids called S’il Vous Play. That has a Fantasia theme.

We got to see a couple of the different types of rooms. The Tower Studios are small, and meant for an intimate getaway. When you first walk into one you may notice that there isn’t a bed! Don’t worry, the sofa folds to reveal a very comfortable place to stay. The actual bed comes out of the wall, this is not a typical sofa bed. Don’t let the size fool you, these studios are going to be popular. We also got to see a Grand Villa. This was the opposite of a Tower Studio. It has three bedrooms, a living room area, and even a large dining table. The Grand Villa sleeps up to 12 people.

Even though Disney’s Riviera Resort is a Deluxe Property, you will still find plenty of Disney magic to go around. The artwork in the rooms and the hallways is phenomenal! The art was created for the resort. You’ll see Disney characters and themes with a special artistic twist on them. In one of the common areas there are also walls that are filled with pictures of Walt Disney and his family. These black and white photos were taken in the 1930’s, and they depict how much the man who started it all loved to travel.

The exterior of Disney’s Riviera Resort is a bit different than what you might expect to find at other Disney properties. You can’t help but notice the “RR” on the outside of the building. Along the Riviera in Europe, many of the hotels have their initials in a similar fashion, so people cruising the river can see them. This tradition was honored at the new resort. There are also bright colored touches on the exterior, which also pay homage to the style of the buildings along the European Riviera. With the big touches and the small, the property is stunning.

Another nice touch is the ironwork that you will find on the balconies. At a glance it might look like it’s just a nice design, but if you look a little closer you will notice a familiar couple’s likeness woven into the pattern. There are plenty of Hidden Mickeys and Minnies throughout the property.

Even though Disney’s Riviera Resort is a Disney Vacation Club property, you do not need to be a DVC member in order to stay there. That said, DVC members receive benefits that aren’t available to the general public. A couple of these are Moonlight Magic, which is a special event in a park that is closed to the public, and the Member Lounge at Epcot. If you visit Walt Disney World often, you might want to look into DVC membership. It could pay for itself in just a few years.

I highly suggest that you check out Disney’s Riviera Resort, even if you do not have a reservation there. The Disney Skyliner makes it easy to stop by for a character breakfast, or a relaxing meal followed by fireworks. This resort has a lot to offer, and it is beautiful as well.