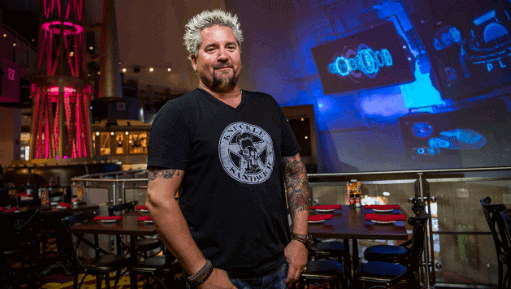 The opening of Planet Hollywood Observatory at Disney Springs in Walt Disney World has been a much anticipated event.  We are now hearing reports that there have been inspections taking place at the restaurant earlier this morning.  It appears those inspections went well, as Disney Parks Blog has stated that the restaurant is open and posted photos of Guy Fieri in the new location.

This location was originally a Planet Hollywood location in Downtown Disney (now Disney Springs).  It closed last year for a this lengthy refurbishment to update the restaurant and re-theme it as the Planet Hollywood Observatory.  The menu was also completely re-done and created by celebrity Chef Guy Fieri.  Disney Parks Blog described the restaurant as, “Inside it’s an immersive theatrical dining experience, with each floor providing a different ambience, including the fabulous curated collection of film-making memorabilia and a 4,500-square-foot video wall the uses trompe l’oeil 3D technology – images with such realism that they appear to be in three dimensions.”

We can’t wait for this one to finally open and taste the delicious new menu!