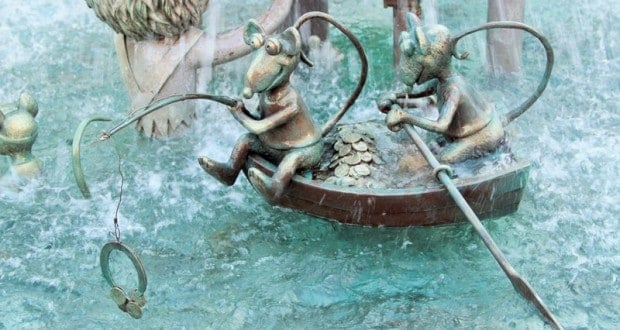 For those of you Muppet lovers out there, changes at Walt Disney World could mean exciting news is on the way.  Those of you familiar with the Muppet Courtyard area of Disney’s Hollywood Studios will recall the Miss Piggy as the Statue of Liberty Fountain that resides in the center of the Muppet Courtyard area at the park in Walt Disney World.  The fountain hasn’t been operational for a while as the entire area around Muppet Courtyard has been changing and being refurbished as part of the various expansions planned for Disney’s Hollywood Studios.  The fountain was being used as a garden area to plant various flowers, but no water feature has been used.  Now we have reason to believe that the fountain could return to its original fountain function.

There are now construction walls up around the fountain that lead us to believe that work is being done in order to restore the water feature and return it to a functioning fountain.  This would definitely be a perfect re-addition as a focal point to the courtyard.

This comes after a whole new Grand Avenue area was created right next to Muppet Courtyard.  Grand Avenue is themed after current-day downtown Hollywood and features BaseLine Tap House as a pub and quick bites location within the new buildings and facades.

Who else out there is hoping that we get to see water return the fountain very soon?