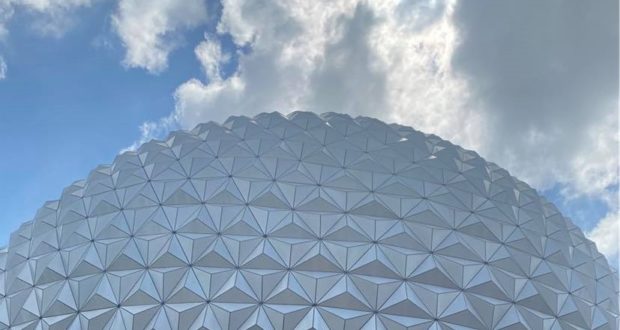 I’m a local Annual Passholder, and my schedule is usually pretty flexible. Since Walt Disney World reopened the theme parks I have returned several times. The park that I have visited the most has been Epcot, because that is usually the easiest park to get a last minute Disney Park Pass reservation for. I had only visited on weekdays, and I was always amazed by how empty it was. I was able to snag a reservation for Saturday, August 8. I had heard that things were a bit different on the weekends, so I decided to see for myself.

I arrived at the park in the early afternoon. I know that all four parks can have a bit of a morning rush, and I wanted to avoid that. It was 97 degrees without the heat index, and there is no shade on the walk from the parking lot. At temperature check my skin temperature was higher than 100.4 degrees, which didn’t surprise me because of the blazing sun. When this happens it’s not really a big deal. There are two tents on the side where you can cool off. They have water available, and you can sit down and remove the mask if you want to. The problem was that only one of the two tents had someone working, and the line grew long quickly because it was so hot out. That meant people were still standing out in the heat while waiting to be able to cool off. The woman inside the tent was fantastic, and after a minute or so out of the sun my skin temperature was back down to normal and I was on my way.

There was also a line to go through security. It wasn’t long, but it was something that I hadn’t experienced during the week. There was no line at the park entrance, though, there were a few scanners open.

Once inside I didn’t notice too much of a difference at first. I headed towards The Land because I wanted to see if either Winnie the Pooh or Joy were out. The crowd was heavier, but not like you would expect on a normal weekend day in August. People have discovered where this new kind of character greeting can be found, and there were several families in the area. They were staying apart, and there was a Cast Member on hand to gently remind people if they were getting too close to other groups. Everyone handled it well.

I decided to walk around World Showcase. It was definitely more crowded than I’ve seen it since before the closure. I was at Epcot on the last day back in March, and I think there were fewer people that day. That said, yesterday was nothing like a normal Saturday. Groups were doing their best to keep distance between them as they walked, and people were going to the side and staying away from others when enjoying something from the Taste of Epcot International Food & Wine Festival.

The main problem with social distancing was for the Character Cavalcades. Some guests discovered where the characters would come out from, and they would wait. When a cavalcade started its route, a large group would follow. If someone tried to leave some space, someone else would sneak into the spot to try to get a better view. There weren’t enough Cast Members in the area to remind everyone to stay apart. If we hope to return to some semblance of “normal” one of these days, people need to do better than this.

Wait Times while I was there were higher than I’ve seen them at Epcot since the reopening. Journey Into Imagination With Figment had a ten minute wait. It was 15 for Spaceship Earth. Frozen Ever After had a 50 minute wait. I didn’t check Soarin’, and Test Track was down while I was there. The problem is that people were waiting outside, in the sun. At one point the line for Frozen Ever After went well into China. People were keeping apart like they should be, but this was the first time since I’ve been back that I’ve seen the line go much past Akershus. Some of the posted times have been high, but I believed it when I saw that it was a 50 minute wait.

There were also lines for many of the Global Marketplaces. Again, people were keeping spaces open, but they were still having to wait. It was not near the wait for a regular festival, but when I’ve bought food before yesterday there was never anyone in front of me.

There were people trying to get around the face covering rule. Yes, they’re hot, but they are also required. This is going to be a rule for the foreseeable future. Orange County officials have said that they expect the law to still be in place in the spring. Epcot is located in Orange County. If you have a problem with face coverings, you may want to postpone your trip.

Even though Epcot was definitely more crowded than I’ve seen it on a weekday, it wasn’t overcrowded. There was plenty of space, and I still felt comfortable there. There are a couple of reasons why the crowd level might have been up. This was the first weekend that there are no blackout dates of Silver Florida Resident Passholders. Also, according to the Availability Calendar, there were spots open for resort guests and theme park ticket guests. Disney hasn’t released the numbers for how many reservations are available for each segment, it could be that there were just more people visiting. There were times when it looked like there was a mass of people, but then a slightly different angle showed that there was space in between those people. I think that Disney is doing an excellent job of keeping people safe, while allowing them to have a good time. Yesterday did not change my mind about that. Even with things being busier than I’ve seen them, it was a fraction of a normal Saturday.