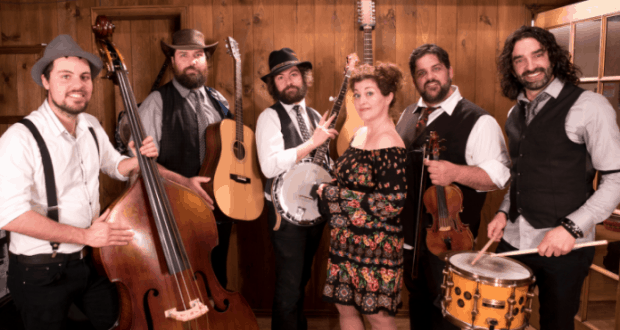 If you are a fan of the live entertainment within the World Showcase, then you are going to be excited about one of the latest announcements from Disney Parks Blog.  We learned today that starting on June 13th, the Blueberry Grass Band will be hitting the stage.  They will be on the Mill Stage within the Canada Pavilion in Epcot’s World Showcase.  The Blueberry Grass Band is a group coming to us from Quebec who perform a variety of French and English Canadian hits in their own way.

In their home area of Quebec, Saguenay-Lac-St-Jean, the residents are known as “blueberries.”  The band took their name from this nickname.  Their performances are of a joyous nature, filled with upbeat tuns and a cheerful type of rapport between each of the members within the group.  The group is a 6 person band that features a variety of different instruments including:  string bass, guitar, violin, drums and banjo.  They have performed in 20 different countries as well as on “Britain’s Got Talent” and “The Tonight Show with Jay Leno.”

Blueberry Grass Band will appear for a limited time from June 13th through August 26th on the Canada Mill Stage at Epcot, so you will want to make sure to see them while you have the chance.

Who out there would love to check out the Blueberry Grass Band?