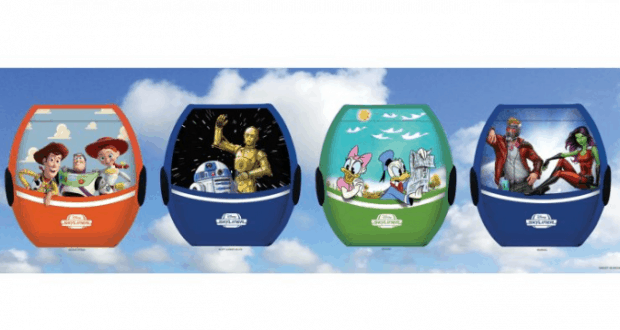 We are all extremely excited for Disney Skyliner, coming to Walt Disney World.  Some guests that have been around property may have seen it in operation in testing phases.  The Disney Skyliner is currently scheduled to open in the fall.  It is a new state-of-the-art gondola system that will connect Disney’s Hollywood Studios, Epcot, Disney’s Art of Animation Resort, Disney’s Pop Century Resort, Disney’s Caribbean Beach Resort and Disney’s Riviera Resort, the newest Disney resort opening for stays later this year.

You can check out this video below to learn more about the Disney Skyliner from Jordan Matthews at Walt Disney Imagineering:

We previously announced that many of the gondolas will feature characters from various Disney films, attractions, characters and more.  Guests may jump into a gondola where from the ground it will look like Mickey Mouse, Minnie Mouse, Pluto or Chip & Dale are riding along with you. Several Disney animated films will be represented, including “Beauty & the Beast,” “Frozen,” “Lilo & Stitch,” “Moana,” “Peter Pan,” “The Princess and the Frog,” “Ralph Breaks the Internet,” “Snow White and the Seven Dwarfs” and “Zootopia.”

Here’s a sneak peek at what a few of these special gondolas will look like:

The other themed gondolas that will be part of the system include:

We will keep you posted as we hear more about the Disney Skyliner.  What do you think so far?