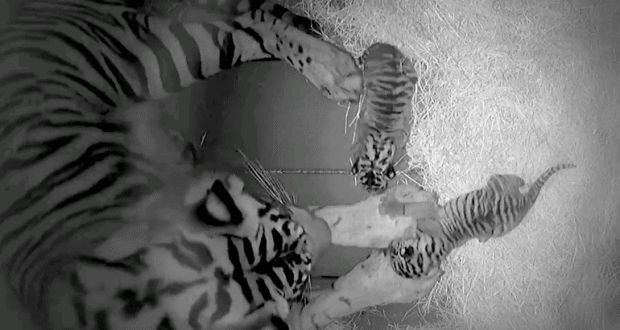 Today Disney Parks Blog announced the addition of two new residents to Disney’s Animal Kingdom in Walt Disney World.  Sohni, a Sumatran tiger living at Disney’s Animal Kingdom has given birth to the first Sumatran tiger cubs to be born at the park.  Animal professionals at Disney are reporting that the mother and her two cubs are bonding well and that they are all doing great so far.  They receive around-the-clock care during this time to monitor their well being.

The following video was released where you can see the proud momma with her new babies:

The Disney Conservation Fund previously issued this statement before the cubs were born:

“Disney is involved in efforts to save critically endangered Sumatran tigers.  To date, the Conservation Fund (DCF) has provided nearly $2.5 million to protect tigers and their habitats.”

The mother, Sohni, has been at Disney’s Animal Kingdom since 2014, while the father, Malosi, has lived there since 2015.  The birth of the cubs is exciting news for the species as a whole, given that these tigers are extremely endangered.  There are reported to be only around 500 of these gorgeous Sumatran tigers left in the wild.

We expect that guests will be able to see mom and the new cubs within the next several months at Walt Disney World. Who else can’t wait to see these adorable cubs in person?