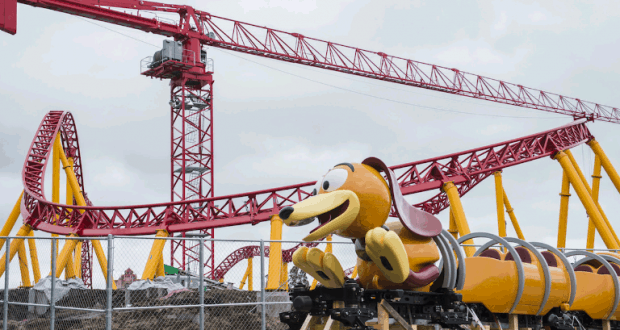 Slinky Dog Dash is one of the new attractions slated to open in Toy Story Land in Disney’s Hollywood Studios at Walt Disney World.  Toy Story Land is one of the new themed expansions coming to Walt Disney World, opening in Summer of 2018.  We reported previously that the images of the Slinky Dog ride vehicles had been released by Disney Parks Blog.  It appears that the attraction has begun safety testing as Slinky Dog was seen running the track.  This means that the ride is somewhat operational, which puts us even closer to finally getting to experience this amazing new attraction.

The entire Toy Story Land expansion will total 11 acres and is expected to open in Summer of 2018.  The other attraction opening with Slinky Dog Dash is Alien Swirling Saucers, themed after those fun aliens in the crane game.  Slinky Dog Dash is a coaster that families will be able to enjoy together.  The theme is based on that Andy would have built the coaster himself using his Mega Coaster Play Kit along with other toys and fun.  The ride vehicles will be Slinky Dog with his slinky coils stretching and moving throughout the ride.

Here is a video that Disney Parks Blog released a little while back debuting the ride vehicle:

Who else has seen Slinky Dog on the track?  Who can’t wait to ride this new exciting attraction?