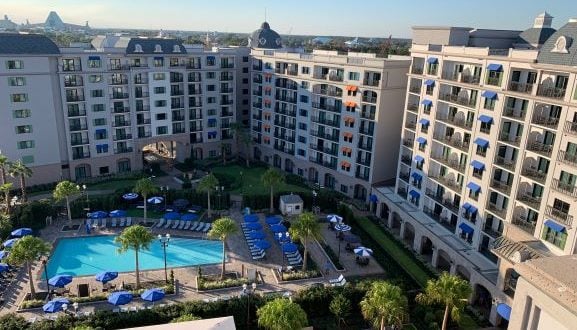 My daughter and I are part of a hosted media group that has been invited by Disney for a Resort showcase. We are spending three nights at Disney’s Riviera Resort, and we will spend the next couple of days touring several resorts. We will also be dining in some of the restaurants.

We checked in this afternoon a little bit before 4:00. When we arrived at the resort the Security Cast Member was friendly and gave good instructions of where to park. She also offered to have someone help us with our luggage. We didn’t need the help, because we’re both light packers, and we live just a few minutes away. We then followed her instructions and easily found a good parking spot. If all goes according to plan, my car will stay there until we check out on Friday.

I decided that I did not want to attempt online check in because I wanted to make this experience as “typical” for the average guest as possible. I also wanted to interact with some Cast Members before I started wearing a media badge. Check in was incredibly simple. We walked into the lobby, and someone immediately asked if we needed help. We told him that we were checking in, and he led us to another Cast Member. I gave him my name, and he took care of our paperwork and MagicBands. He explained the best way to get to our room, and he left us with a smile.

When I saw our room I could hardly believe my eyes. We are staying in a one bedroom villa, and we have a view of the beach area and the kids’ S’il Vous Play pool area. It is a preferred view room. I cannot believe the size of it! My first apartment was a lot smaller than this room is. It sleeps five. There is a bedroom, and then in the living room area there is a double pulled down bed as well as a single one. The room has a full kitchen, a table with chairs and a bench, and a washer and dryer. There is even a vacuum cleaner and a highchair in one closet. The bathroom is really two rooms that are adjoining. One of them has a sink and the tub. The other room has a sink, the toilet, and a shower. Both are spacious. Our room also has a balcony with a small table and two chairs.

I’ve been to Disney’s Riviera Resort before for the Grand Opening media event. I am still in awe of the beauty of the place. I have heard people complain over the years that some of the Deluxe Resorts aren’t “Disney” enough. You can’t say that about Disney’s Riviera Resort! The hallways are filled with artwork representing classic animated films. There is one wall near the lobby that is covered with family photos of Walt Disney. There are pictures of the various Disney Parks castles in the hallways as well. The artwork continues into the rooms. There are paintings that are based on various Disney films, but they have a French or Italian twist to them. They add a lot to the room.

We had dinner tonight at Topolino’s Terrace. This signature restaurant is located on the resort’s tenth (and top) floor. The views from the outdoor patio are memorable, you can clearly see Disney’s Hollywood Studios and Disney’s Animal Kingdom. You can also see Epcot if you know what you are looking for. From Topolino’s Terrace you also have a great view of Disney’s Skyliner.

We started with a few appetizers to share. The Ricotta that we were served is house made. We also had bread that was kind of shaped somewhere between a knot and a breadstick. That was served with two different types of olive oil. For my entree I ordered the Tarbais Bean Cassoulet. It was made up of mushrooms, root vegetables, and plant-based sausage, and topped with breadcrumbs. It came with whole grilled carrots and another breadstick. It was filling, without being the type of meal that weighs you down. It was also quite tasty. I had Fruits of the Forest for dessert. That was a great combination of berries and chocolate, while still being light. The service at Topolino’s Terrace was flawless, and the atmosphere relaxing. This is a great addition to Walt Disney World’s signature restaurants.

After dinner there was nothing else planned for our group, so we went back to the room for a little while. We did return to Topolino’s Terrace to watch the fireworks from the patio. We could see the fireworks from both Disney’s Hollywood Studios and the Magic Kingdom. Don’t expect a view like you will find at a restaurant such as California Grill, but the view was still nice. The only problem was that it was cold and very windy! Florida is experiencing the coldest temperatures that we have had in a couple of years, and we could feel it while trying to watch the fireworks. The wind was what really did me in. I grew up in New England, I know cold, but I also didn’t stand outside in January on a windy night to watch fireworks when I lived there. I suspect that the best fireworks view would be from Epcot, but it was just too uncomfortable to stay another hour and find out.

Tomorrow we will be touring several of the resorts, including Yacht and Beach Clubs, and All Star Movies. Our dinner tomorrow night will be at Toledo at Disney’s Coronado Springs Resort. I am looking forward to seeing that again, it has been near the top of my “someday soon” list since it opened. That is another restaurant with an incredible view.