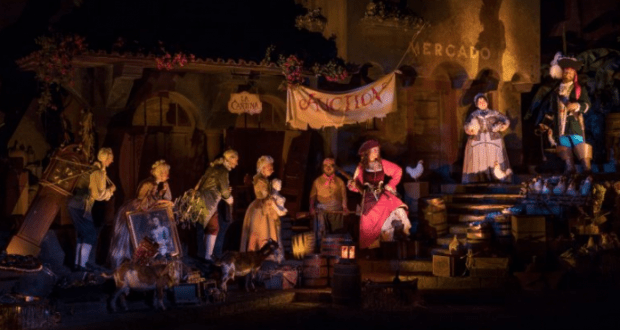 We announced previously that Pirates of the Caribbean in the Magic Kingdom at Walt Disney World had closed in order to make a major, controversial change among Disney fans.  This major change impacted the iconic and famous scene with the “redhead” where she appeared at the “wench auction” and you could hear the pirates chanting, “we’s wants the redhead.”  Pirates of the Caribbean has officially re-opened at the Magic Kingdom and guests are now seeing the new version of the attraction for the first time.

The attraction has made several changes throughout the years. This scene change to the auction scene will also be implemented at all versions of the attraction around the globe.  Here is how Disney Parks Blog described the changes:

“The pirate auctioneer now oversees a sale of the townspeople’s most prized possessions and goods. In this scene, the familiar redhead figure has switched sides to become a pirate named Redd, who’s just pillaged the town’s rum supply and has something to say about it.”

We are glad that the attraction has re-opened since we always miss our favorite attractions when they undergo refurbishments.  Who else out there can’t wait to see this new scene?  If you have already seen it, what do you think about it?