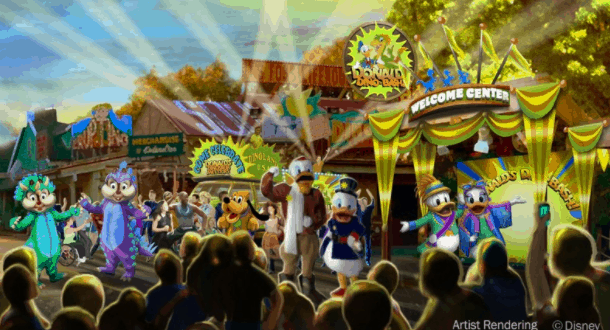 We previously reported that there would be a temporary character event at Disney’s Animal Kingdom featuring Donald Duck and his friends.  The event is known as Donald’s Dino-Bash and will take place in Dinoland, U.S.A. starting on May 25th, 2018.  While it was originally communicated that this event would be available for a limited time, it looks like Disney has decided to make this a permanent event at the theme park.  A show director for Disney Parks Live Entertainment, Mark Renfrow, gave the statement that it would be sticking around.  Durint the event, guests will be able to see Donald Duck, Daisy Duck, Launchpad McQuack, Goofy, Pluto, Chip and Dale.  Chip and Dale will be all dressed up in their dinosaur costumes, too!

Donald Duck has learned that his ancestors were descendants of the dinosaurs, so there is a big dinosaur-themed celebration based on this discovery!  There will even be new decor in the area, perfect for the party.  We can’t wait to check out this fun experience and celebrate in this discovery with Donald!

Who will adding this to their must-do list this summer?