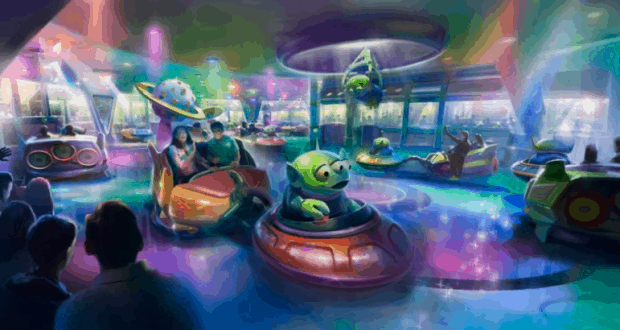 Disney Parks Blog made a couple of interesting announcements today that we must share with you.  There has been a rumor for some time now that there was a possibility that Disney’s Hollywood Studios would receive a name change as part of the overhaul that is going on at the theme park.  One of the confirmations that was made today was that the  Hollywood Studios name would remain for the foreseeable future.  Since the new expansions and attractions will feature immersive lands and experiences right from Hollywood favorites, the name is extremely fitting. It is good to know that we can put this rumor to bed and continue referring to the park as Hollywood Studios.

In the anticipation of Toy Story Land opening this summer, there was also a rendering of some of the latest artwork for one of the new attractions at the land.  Alien Swirling Saucers (pictured above) is expected to open in the summer with the rest of the land.  The entire land will allow guests to “shrink” to the size of a toy and play in Andy’s backyard.

As part of the work for the expansion, Toy Story Midway Mania is expected to close the FastPass+ entrance in the near future in order to get the attraction ready for the opening for the new land.  Currently guests are unable to make FastPass+ reservations for the attraction very far into April, so that is when we suspect it may be closing.  We will keep you posted as we hear anything on this directly from Disney.

Are you glad that Disney’s Hollywood Studios won’t be changing its name?