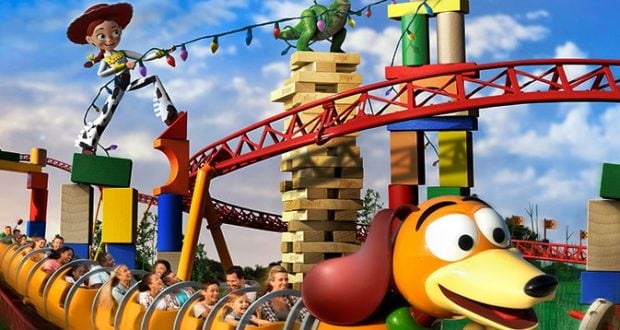 We are all getting extremely excited for the official opening of Toy Story Land on June 30th, 2018.  The new, immersive Toy Story-themed land is set to officially open at Disney’s Hollywood Studios in Walt Disney World.  So far there haven’t been any previews for Cast Members or Annual Passholders, which Disney frequently does for the opening of new lands and attractions.  It looks like Cast Members will finally get their chance to at least check out Slinky Dog Dash.  There is a limited testing event for Cast Members scheduled for June 14th through 18th.  This is the only advanced preview opportunity that we have seen so far, so we aren’t sure if this will be the only one offered and guests will just have to wait until the official opening to check it out!

With the opening of this new land brings us two new attractions Slinky Dog Dash and Alien Swirling Saucers.  Toy Story Mania! will also be open with all three ride tracks.  There is also the addition of the dining location, Woody’s Lunch Box, and retail shopping experiences where guests will be able to find a variety of different Toy Story items for sale.  The story behind the land is that guests will “shrink” to the size of a toy and become toys in Andy’s Backyard.  Guests will get a look at what it would be like to be a toy roaming around Andy’s backyard with all of his other games and toys, plus sightings of some of our favorite Toy Story characters.

Who will be checking out Toy Story Land this summer?