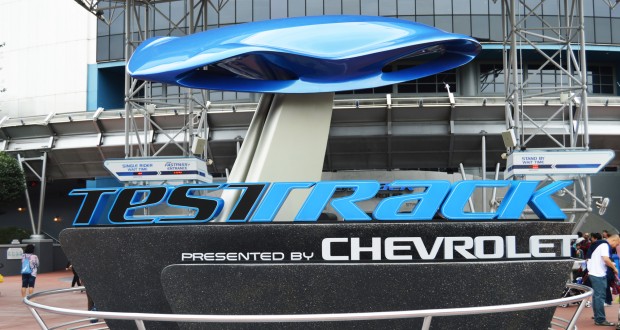 Doctor Disney is reporting some strange guest behavior At Walt Disney World’s Epcot Theme Park from over the weekend.

It was reported that during a brief stoppage of the ride for technical difficulties a guest apparently cut their seat belt and exited the Test Track car.

Doctor Disney has multiple confirmation sources from four people with first-hand knowledge of the situation.

The attraction was only down briefly, but it appears it continued on with one less passenger. During the downtime, the Guest had apparently used a knife of some sort to cut through his seat belt and exit the vehicle.

The remaining Guests reported it to cast members when the vehicle returned to the loading station. They told cast members the former rider was wandering around the area near the semi-truck inside the attraction, and not on the outside high-speed loop.

As soon as Test Track began moving again, the Guest had not returned to the car and had apparently found an emergency exit and left without being found.

The moment that the Cast Members were advised of the Guests leaving the vehicle, an emergency stop took place and the entire attraction was evacuated. The disabled vehicle was taken out of operation and the seat belt was replaced the following morning.

A search of the attraction turned up nothing.

This “Bad Behavior” Takes the Cake, but below is an article written by Sarah Chapman Top 10 Bad Behaviors on a Walt Disney World Vacation

Sometimes when people go on vacation they forget to pack their manners. Unfortunately this can make for a difficult vacation for the people around them. I think Walt Disney World should institute a time out policy for these rude behaviors—Stitch’s Great Escape would be the perfect spot. Make them spend some time in there (1 minute for every year of age is the general rule, right?) and I am sure they will adjust their attitudes and be good as gold for the rest of their vacation. Don’t’ get me wrong, many people are very nice and polite on their vacations and you often get a “Hello” or small talk from a complete stranger that you might not get in your home town. Here are the Top 10 Bad Behaviors that really irritate me to see on vacation:
10. Littering

You may not realize the amount of research and careful planning that Walt Disney and the park designers went into for trash collection—it’s pretty amazing. But it boils down to knowing how close together these waste collectors need to be to keep you from littering. So don’t do it. Walk the extra step and throw your paper wrapper, candy, gum, whatever in the can. And while you do it notice the great theme of the can itself and how it matches the land you are in (details everywhere). This is also why Walt Disney World does not sell gum.

I noticed this particular bad behavior on several occasions on my last vacation. Parents changing diapers on quick service food tables or picnic type tables outside—where some unsuspecting guest is going to sit down and eat their lunch. Changing diapers in the rented Disney strollers out in front of everyone. Changing diapers on a bench in the parks. Please, take your child into a nearby restroom (they are not very far apart either) and use one of the changing stations there. Or walk over to the Baby Care facilities provided for just this purpose. It is more sanitary for everyone involved and protects your child from the eyes of strangers—you never know their intentions.

Now this offense has blossomed in the past several years with the invention of the tablet—usually the iPad. I know people have their reasons, but I have yet to understand why you would bring your tablet to the parks as a means of recording photo and video memories. An actual camera, and usually your cell phone camera, will give you much better results and be less annoying to those around you. There is nothing worse than standing behind someone, ready to watch a parade or fireworks and as it begins up goes the iPad completely blocking your view. You are forced to watch the entertainment through the offender’s iPad—not really the same. And if it is at night, the glow of the screen exacerbates the problem. There are other View Blocking culprits like the last minute child on the shoulders—that is more forgivable than the iPad people—double Stitch timeout time for the iPad people!

Walt Disney World is a family destination, so watch your language! I know tempers can flare. You’re hot, you’re exhausted, something isn’t going the way it should and you’ve spent a lot of money to come here. But dropping a loud F bomb in Fantasyland as I heard a couple of weeks ago or cussing out your spouse in Epcot are bad behaviors that most of us don’t want to hear ourselves, much less our children.

6. Cutting Off Wheelchairs, Scooters, and Strollers

I only have personal experience with the stroller aspect of this problem, but it can be a challenge. I am sure that maneuvering a wheelchair or scooter is even more challenging. We are all in a hurry to get to our favorite attraction, we all just want to be out of the park after the fireworks, and we all hope we make that bus that’s at the stop waiting. Take notice of your surroundings and be careful not to jump in front of someone that has a harder time stopping on a dime. And, when you have to stop a wheeled object it often causes a pile up behind you. Time out! On the same note, I think a warning is needed for cutting off families so that parents are separated from children in tight or crowded spaces—like trying to exit the park at night and loading some attractions where a pre-show leads to a bottleneck.

5. Stopping in the Middle of the Road

I know—the Castle is beautiful and breathtaking and you may have waited your whole life to see it. Just remember, there are people behind you and if you stop dead in your tracks they may bump into you. With smart phones and the need to use the My Disney Experience app this seems to be more of a problem than in the past. Stopping to read a map is another leading cause of stop-in-the-middle-itis. Just move over to the side so traffic can keep flowing people!

Although it is not the custom in all countries (and WDW is definitely an international attraction), service people expect to be tipped at Walt Disney World—and their salaries reflect that they are getting gratuity to supplement their income. If you are on the Dining Plan gratuity is not included, so remember to tip your servers. If your service is not up to par, ask to speak to a manager. If you have questions about who to tip and how, check out this article: http://www.disneydining.com/top-10-questions-tipping-walt-disney-world/

3. Not Giving Up Your Bus Seat

HUGE personal pet peeve for me. I have ridden standing on a bus while 7 months pregnant and not one seemingly able bodied man (or woman) offered me a seat. Not one person offered to move their 2 year old to their lap so I could sit down. Same thing once said baby was born—I stood on a bus holding a 7 month old baby. If someone is able to stand, and sees someone who might be less able to stand, the polite thing is to offer that person your seat. If you have a small child and you know the bus is going to be crowded (maybe first thing in the morning at park opening, or returning home after closing), go ahead and put that child in your lap. I will say that on my last trip I had several people offer their seat to me so I could sit with my 2 year old (in my lap)—they have restored my faith in humanity. For everyone else—a FULL day of Stitch!

If the parade is important to you, you need to get a spot well before it begins. Some many bad behaviors center on parades. It is very frustrating to stake out your spot 30-60 minutes in advance and then 5 minutes before it starts or as the first float comes down the street have a family wedge themselves in from somewhere rows behind you to block your view. Not nice, people! If there are children, I will often offer to let them sit in front of me since I can see over them, but if I have been sitting in my spot for 45 minutes I have earned the right to a good view.

Number 1 No-No bad behavior at Walt Disney World. And this one can be controversial. For my mandatory, go straight to Stitch Time out offense I mean those people who obviously have no one in line ahead of you they are trying to meet up with—they are just passing. The attraction isn’t going anywhere, wait your turn, be polite and wait in line. Disney has some amazing queues for you to enjoy if you do.

So, what are your pet-peeve, bad behaviors at Walt Disney World? And, do you say anything to the badly behaving guests.