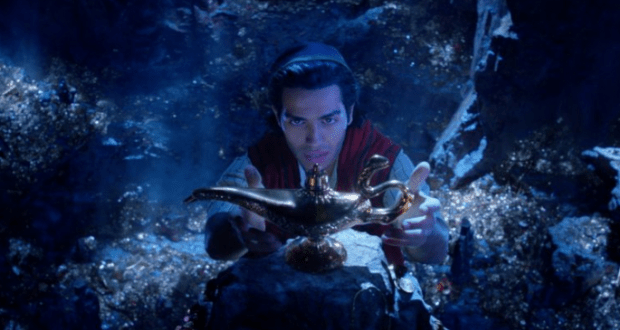 We are so excited for the new live action version of Aladdin, which is set to hit theaters this year.  Disney Parks Blog announced that Disney Parks locations, including Walt Disney World, and the Disney Cruise Line will off a special preview of the new film for guests to check out.  For only a limited time, starting on April 19th, guests can check out this sneak preview.  At Disneyland Park the preview will be in the Main Street Opera House in Town Square.  At Walt Disney World, it will be at Disney’s Hollywood Studios as part of the Walt Disney Presents attraction.

Check out this special message from two of the stars of the film, Will Smith and Mena Massoud:

Here is a synopsis of the film:

A thrilling and vibrant live-action adaptation of Disney’s animated classic, “Aladdin” is the exciting tale of the charming street rat Aladdin, the courageous and self-determined Princess Jasmine and the Genie who may be the key to their future. Directed by Guy Ritchie (“Sherlock Holmes,” “The Man from U.N.C.L.E.”), who brings his singular flair for fast-paced, visceral action to the fictitious port city of Agrabah, “Aladdin” is written by John August (“Dark Shadows,” “Big Fish”) and Ritchie based on Disney’s “Aladdin.” The film stars Will Smith (“Ali,” “Men in Black”) as the larger-than-life Genie; Mena Massoud (“Tom Clancy’s Jack Ryan”) as the charming scoundrel Aladdin; Naomi Scott (“Power Rangers”) as Jasmine, the beautiful, self- determined princess; Marwan Kenzari (“Murder on the Orient Express”) as Jafar, the powerful sorcerer; Navid Negahban (“Legion”) as the Sultan concerned with his daughter’s future; Nasim Pedrad (“Saturday Night Live”) as Dalia, Princess Jasmine’s free-spirited best friend and confidante; Billy Magnussen (“Into the Woods”) as the handsome and arrogant suitor Prince Anders; and Numan Acar (“The Great Wall”) as Hakim, Jafar’s right-hand man and captain of the palace guards.

Here is a look at the latest trailer released for the film:

Aladdin is set to debut in theaters on May 24th, 2019.  Who else can’t wait to check out this movie in the theaters?