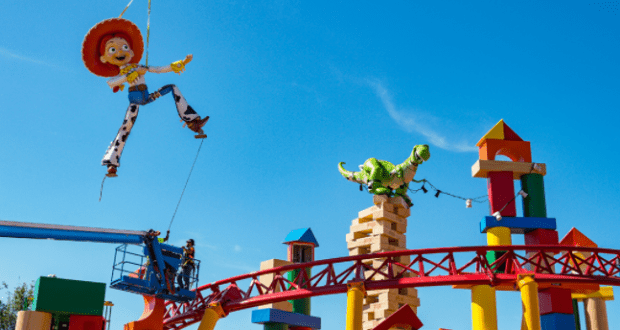 We don’t know about you guys, but we definitely can’t wait for Toy Story Land to open at Disney’s Hollywood Studios in Walt Disney World.  We got another sneak peek today from Disney Parks Blog where it has been announced that Jessie and Rex have been added to Toy Story Land as the first Toy Story characters to make their grand appearance.  They have been added to the Slinky Dog themed roller coaster area of the new land.  According to Disney Parks Blog, the story line for Jessie and Rex is as follows, “Rex and Jessie decided to help Andy build a roller coaster using his Mega Coaster Play Kit in his backyard by stringing up the lights on towers of blocks. Rex, of course, has got tangled up in the lights, but Jessie is nearby to help.”

Here is the latest video that has been released with Jessie and Rex included:

The new Toy Story Land is currently set to officially open to guests in the summer of 2018.  This opening is sure to be extremely exciting and will mean a very busy summer for Walt Disney World.

What do you all think of Toy Story Land thus far?