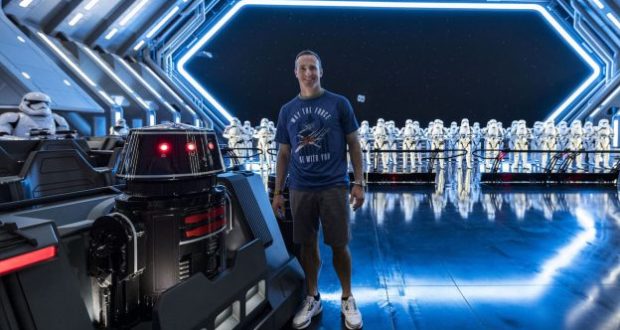 Drew Brees, a star quarterback in the NFL, visited Walt Disney World’s Star Wars: Galaxy’s Edge this past weekend! Drew’s exploration of this new Hollywood Studios land was filled with intergalactic excitement – including a ride on Star Wars: Rise of the Resistance of course! Check out the details and video below from DisneyParksBlog:

Today, star quarterback Drew Brees visited Star Wars: Galaxy’s Edge at Walt Disney World Resort and experienced Star Wars: Rise of the Resistance, which he called “one of the greatest rides I have ever been on.”

“I really felt like I was on a journey,” he said, after enjoying the groundbreaking attraction with his family.

Brees made sure to stop on the planet of Batuu at Disney’s Hollywood Studios while in Florida for the 2020 NFL Pro Bowl, which will be played on Sunday, January 26 at Camping World Stadium in Orlando. Not only did he and his family experience Star Wars: Rise of the Resistance, they also had the opportunity to build their own lightsabers at Savi’s Workshop and to design their own droids at the Droid Depot.

“Our experience here at Star Wars: Galaxy’s Edge has been phenomenal,” Brees said. Check out all the excitement of Brees’s visit in the video above!