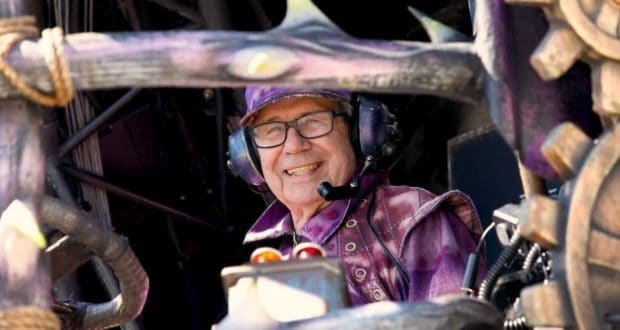 Magic Kingdom’s Festival of Fantasy Parade celebrated its 6th anniversary on Monday, March 9. Since the debut, this parade has been a popular favorite among Disney fans! But what really makes the parade extra special are the Cast Members who put it on. One of those is Larry Wrobel, who recently celebrated a milestone of his own. Check out the video and details below from DisneyParksBlog:

Larry has been driving floats down the Magic Kingdom Park parade route for years, but there was one that stood out as a must-do: the magnificent Maleficent dragon float. That dream has now come true, and what made the moment even more magical is that his family was there to witness it. Larry’s wife, who also works at Magic Kingdom Park, joined the rest of his family who traveled from five different states just be on Main Street, U.S.A. so they could celebrate his bucket list dream with him.

Check out this incredibly heart-warming magical moment for Larry and his family:

Dreams like this come true every day at Walt Disney World, but we get even more excited when these moments happen for our incredible cast members. It’s just another part of the #DisneyCastLife!

Be sure to cheer extra loud for Larry and his fellow parade cast members the next time you catch the “Disney Festival of Fantasy Parade”!

2020-03-09
Jamie Sylvester
Previous: How to Make the Most Out of Your Hollywood Studios Day at Walt Disney World
Next: Enjoy the Flavors of New Orleans Aboard the Disney Wonder