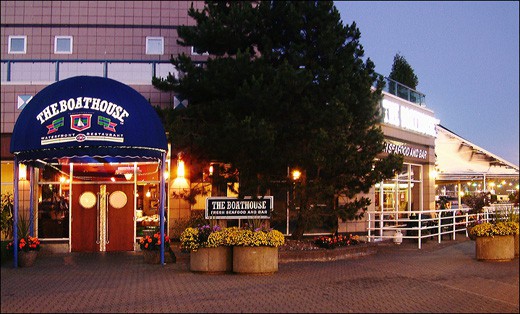 Upscale Restaurants in the Works for Disney Springs

(Picture is of the Boathouse location in New Westminster, BC)

Upscale Restaurants in the Works for Disney Springs

Since the announcement that Downtown Disney is to be transformed into Disney Springs, it has been mentioned repeatedly that the number of restaurants in the district will double. Very little has been said about which new restaurants will be coming in.

Rumors state that Disney is negotiating with several upscale restaurants. How close they are to deals remains unknown. No official word has been released by Disney. According to Orlando food blogger Scott Joseph, some of the big-name restaurants in the running to be added to the Disney Springs lineup include:

Morimoto: a Japanese and sushi restaurant that features the creations of famed chef Masaharu Morimoto. There are currently restaurants in New York and Philadelphia. The restaurants feature hot and cold selections, a raw bar, a sushi bar, noodles, and chef’s choice selections. There are specialty drinks and suggested pairings.

The Boathouse: a West Coast chain by the same company that is responsible for Rainforest Cafe and T-REX, but with a different concept. The current restaurants feature fresh steak and seafood, with an emphasis on local and sustainable foods. Disney already has a construction permit for a restaurant called “The Boat House Orlando”, which will be located in The Landing section of Disney Springs.

The Edison: the original restaurant is based in Los Angeles. According to the restaurant’s LA website, “The Edison, Celebrates an era of invention and imagination – the blending of science, art and industry.” The menu features “Patented Snacks” as well as Far East dishes, flatbreads, sandwiches, and “Imagination, Innovation and Indulgence” (also known as dessert). There is an extensive drink menu, including specialty cocktails and high end liquors.

STK: bills itself as “not your Daddy’s steakhouse”. There are currently locations in Atlanta, New York, Los Angeles, Miami, and London. The current locations have a chic feel to them, instead of the rugged atmosphere that you’ll find in many steakhouses. The restaurant features local and organic foods whenever possible. There is an extensive cocktail menu. STK is reportedly the closest of the restaurants to signing a deal with Disney.