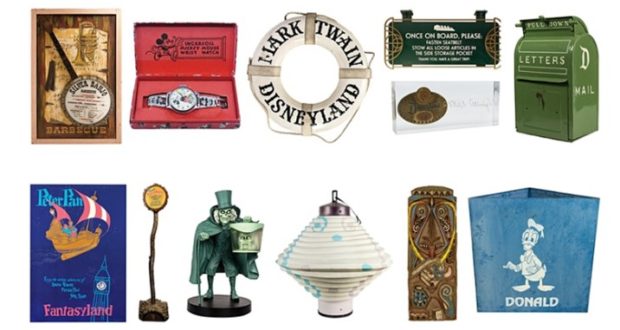 Want a piece of Disney history? Well, a big Disney auction is scheduled to take place with Van Eaton Galleries on August 15 and 16, 2020 and features “Disneyland: The First 65 Years”.

As shared on the Van Eaton Galleries webpage: Van Eaton Galleries is proud to present “Disneyland: The First 65 Years,” an auction of over 1000 artifacts of Disney Parks history! This large exhibit and two-day auction tells the history of Disneyland and Walt Disney World through rare props, signage, costumes, vintage souvenirs, attraction posters, and much more. Highlights of this auction include original Walt Disney autographs, rare 16mm films of some of Disneyland’s earliest Lessees, park-used attraction vehicles, an original mock-up for the Pirates of the Caribbean guidebook, Disney Legend Milt Albright’s original 1955 cast member no. 10 metal ID badge, huge park used signage, and a plethora of other one-of-a-kind items.

“Disneyland: The First 65 Years” will be held Aug. 15 and Aug. 16. The on-site auction, held in Sherman Oaks, California, will follow COVID-19 guidelines, but it also will be streamed live and bids can be made by phone or online.

As shared by the Orlando Sentinel: On the Disneyland side of things, artifacts up for grabs include a sign from the Don DeFore’s Silver Banjo Barbeque, an opening-day restaurant, that the auction house estimates will bring in between $60,000 and $80,000.

Among the auction’s other notable items from the Anaheim park are a gold VIP ticket to Disneyland’s opening day in 1955, an original Space Mountain ride vehicle, a Haunted Mansion tombstone prop and a rifle from the Main Street Shooting Gallery.

Offered items from Walt Disney World theme parks are generally not anticipated to be as pricey, although a trash can from the Polynesian resort that reads “Waste please, mahalo” is expected to draw bids between $2,000 and $3,000. Other expected big-ticket items include an Epcot preview book created for President Jimmy Carter ($2,000-$4,000) and a poster for the “coming soon” Mickey’s PhilharMagic attraction ($3,000-$5,000).

The WDW items include many paper goods such as 1970s brochures, manuals and press packets. There’s a Hall of Presidents maintenance manual supplement that was issued after Jimmy Carter and Gerald Ford animatronics were added to the Magic Kingdom attraction.

Other possibilities include costumes from the Walt Disney World Marching Band, Universe of Energy (with Exxon patch), Epcot’s Soarin’, Tower of Terror and the Great Movie Ride, formerly of Disney’s Hollywood Studios. There are doormats from the Contemporary and the Grand Floridian hotels.

It’s not all historic. In the selection is a Lucite paperweight with the Alien Encounter logo and a gift to opening team members for Epcot’s Frozen Ever After ride, which debuted in 2016.

For more information or to register for the auction, go to vegalleries.com/auction.