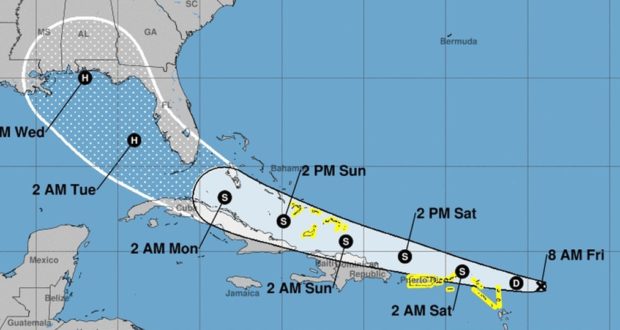 Have plans to visit Walt Disney World next week? Well, you’ll want to keep an eye on the newly upgraded Tropical Storm Laura as the storm could impact Florida next week.

As shared by the OrlandoSentinel, Tropical Storm Laura formed Friday morning while making its way west-northwest near the Caribbean with Florida lying in its path, the National Hurricane Center said in a special 9 a.m. update.

Laura’s future is unclear as the storm faces a number of factors that could stymie its growth and others that would promote it as it stays on track toward Florida. While land interaction with Hispaniola and Cuba as well as dry air could deter its development, Laura is also projected to move over an area of the Gulf of Mexico where is should be generally favorable for tropical development, the NHC said.

Laura is 255 miles east of the northern Leeward Islands. Further strengthening is expected today, and long-term projections have it near the Florida Keys on Monday, and then into the Gulf of Mexico off Florida’s southwest coast as a Category 1 hurricane where it will then head to the Florida Panhandle.