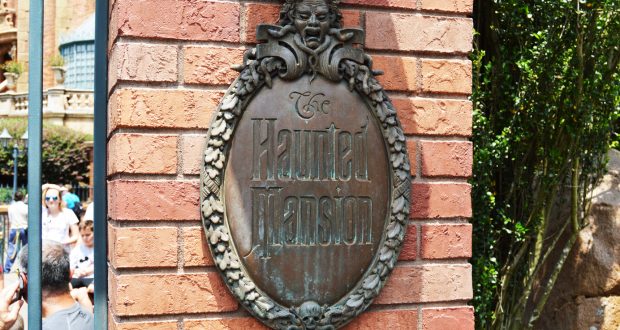 Haunted Mansion exists in different lands at five different Magic Kingdoms across the world.  It can be found in New Orleans Square in Disneyland, in Liberty Square in Walt Disney World, in Fantasyland at Tokyo Disneyland, and in Frontierland in Disneyland Paris (where it goes by the name of “Phantom Manor”).  A lighter, merrier version of Haunted Mansion, called “Mystic Manor”, reflecting different cultural beliefs in that country, appears at Mystic Point at Hong Kong Disneyland.

The interactive queue for Haunted Mansion is definitely our favorite in Magic Kingdom.  We will even avoid FastPasses+ for this ride, just so we don’t miss a thing!  From the pet cemetery, to the perfectly punny mausoleum, to a musical crypt and a tomb spewing water, there is plenty to keep everyone entertained while waiting to enter the Mansion.  Keep your eyes peeled for tombstone tributes; there’s one for J. Thaddeus Toad, from the long-gone Mr. Toad’s Wild Ride, and there are several named for actual Disney Imagineers.  And of course, we can’t forget Madame Leota’s tombstone – if you watch her closely enough, she just might open her eyes and stare back!

Disney Imagineers sure know how to set the scene for a spooktacular experience.  The moment you arrive at Haunted Mansion, you’ll be ushered into an octagonal room, which then locks, leaving you feeling claustrophobic and trapped, with the other guests.  The room begins to stretch creepily, revealing amusingly morbid portraits on the walls.  Suddenly, the room is plunged into darkness, as lightning strikes, a scream of terror is heard, and a corpse is revealed hanging from the rafters.  It’s all great creepy fun, and perfectly sets the tone for the adventure you’re about to embark on!

No run-of-the-mill ride vehicle would do for Disney’s Haunted Mansion.  Instead, guests ride in ghostly style in “Doom Buggies”, delightfully oppressive black vehicles that can rotate in any direction, allowing you to experience all that Haunted Mansion has to offer.  Doom Buggies only hold a couple of people, which was intentional – what better way to make guests feel like they’re truly wandering alone in a haunted house?  Disney Imagineers discovered that placing speakers directly inside each Doom Buggy made guests feel even more uneasy, while the high back on each Doom Buggy creates a visual blockade so that you’ll never know what’s coming next until you’re there!

Fans of Haunted Mansion will know that there are really two different parts to the ride.  At first, the attraction has a distinctly scary, unsettling vibe; this is where the creaky, breathing doors, eerie organ music, other-worldly séance, and life-like waltzing ghosts appear.  Later, there is a definite element of fun and humor, with ghosts playing tricks on one another, and on guests.  Disney Imagineers Claude Coats and Marc Davis, who oversaw the final design of Haunted Mansion, couldn’t agree on the thematic approach to take; one wanted a spookier feel, while the other thought a funny approach would be best.  In the end, both approaches were used, and guests are drawn into a spooky, intimidating haunted house, but leave with a smile on their faces, laughing at the antics of the three hitch-hiking ghosts.

Every time we ride Haunted Mansion, we discover something new.  That’s part of the brilliance of the ride; there’s just so much to see, that you’ll only see a portion of the deliciously devilish details the ride has to offer each time.  Staircases to nowhere appear, and glowing footsteps without owners, while creepy shadows and wallpaper covered with eyes make you feel like you’re being watched.  Door knockers rattle, and doors bend inwards and outwards, as if they’re breathing.  A candelabra floats in a hallway, while a grandfather clock strikes 13, its arms spinning backwards madly.   You may even hear a voice screaming for help, but I wouldn’t if I were you…

The hauntingly majestic Great Hall scene even captured my grandmother’s attention when she visited the park years ago; I remember her telling me about it when I was a child.  The hall is full of translucent, waltzing ghosts, as well as other spectres, such as portrait ghosts who emerge to duel, and ghostly guests eating a long-cold meal. The “ghosts” are created by a very old effect used in theatre, involving reflecting illuminated objects onto glass, which makes them appear transparent.  Amusingly, when Disney’s Imagineers built the animatronics for the ballroom, they built them as you would expect, with the men leading their female partners.  But when the figures were illuminated and reflected, they appeared in the reverse – which means the female ghosts in Haunted Mansion actually lead their male partners!

Did you ever wonder who lent her face and voice to the deliciously eerie Madame Leota, featured in the séance area of Haunted Mansion?  Wonder no longer!  Leota was played by actual Disney Imagineer Leota Toombs Thomas; she also played the small figure at the end of the ride who invites you to “hurry back” and make your “final arrangements”.   (Fun fact: Thomas’ daughter, Kim Irvine, created the attraction’s pet cemetery.)  However, Leota’s voice is none other than Eleanor Audley, who voiced Lady Tremaine in Cinderella, and Maleficent in Sleeping Beauty.

Just when you think you’re out of the woods and have escaped Haunted Mansion intact, Disney has one more surprise in store.  At the end of the ride, you’ll pass a group of hitchhiking ghosts.  These other-worldly travellers actually have names; Phineas carries the carpet bag, Gus has the ball and chain, and Ezra is the tall, gangly one with the bowler.   Watch carefully in the mirror as your Doom Buggy completes its journey, and you’ll see one of these ghosts hitch a ride with you!  You might see one of them sitting between you and your partner in the Doom Buggy, or sitting on the roof – our favorite is the fun trick where a hitchhiking ghost appears to swap the heads of the people in the Buggy.

Now that the long-awaited Haunted Mansion collection has arrived in Disney World, your experience doesn’t have to stop once you leave the attraction!  Haunt the nearby Memento Mori shop either before or after your Haunted Mansion adventure, and take home some ghostly magic to remember your visit.  The selection in the shop is quite varied, and Disney is always adding to it.  You’ll find Haunted Mansion MagicBands, clothing for men, women and children, phone cases, themed bookends, ornaments and dishes, and of course, collector pins.  There are even unique collector items like busts of the “Dread Clan” and metal versions of the horseless hearse, as seen in the grounds of the attraction.  Our favorite?  Step into the photo lab tucked away into a corner of the shop, and pose for a one-of-a-kind holographic haunted photo that’s sure to be a conversation starter! 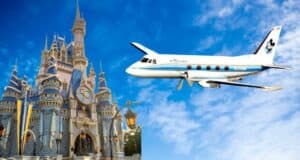 Man Pays Stranger to Fly to Disney With Him for FREE