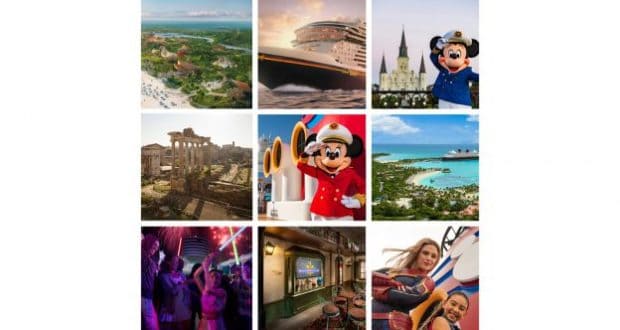 There’s no doubt about it, 2019 was a big year for Disney Cruise Line! As we get ready to usher in a new year (and a new decade!), let’s take a look back to celebrate our top nine moments of the past 12 months.

We revealed the highly anticipated name of the fifth Disney Cruise Line ship, the Disney Wish, as well as a first look at the ship’s elegant, three-story atrium and the iconic Disney character that will adorn the ship’s stern – Rapunzel!

We shared information and two early conceptual artist renderings for our second island destination in The Bahamas, located on the breathtaking island of Eleuthera, which will be a unique destination rooted in Bahamian culture and imbued with Disney magic.

Captain Minnie Mouse made her debut, and we rolled out new youth programs and the funding of scholarships designed to empower girls and young women to pursue careers in the cruise industry.

Stem-to-stern enhancements transformed the Disney Wonder, including an exciting New Orleans-themed lounge that transports guests into the heart of the city’s iconic French Quarter, a sleek new place for teens and a redesigned café for adults.

Marvel Day at Sea and Star Wars Day at Sea set sail once again on select cruises to the Bahamas and Caribbean, combining the splendor of a Disney Cruise Line vacation with a special day at sea filled with unique character encounters, live shows and action-packed entertainment.

Disney Cruise Line guests were the first to meet Captain Marvel, one of the most powerful heroes in the Marvel universe, when she made her debut during Marvel Day at Sea as part of the action-packed celebration aboard select Disney Magic sailings.

7. First Round-trip Sailing From Rome and Visits to Seven New Ports in Europe

The Disney Magic’s summer tour of Europe featured a first-ever round-trip cruise from Rome and visits to seven new ports, including destinations in Sweden, France, Spain, Denmark and Northern Ireland.

8. Second Season in New Orleans and a Return to Greece Announced

We revealed exciting itinerary announcements such a second season cruising from New Orleans in 2021 (following our inaugural season in early 2020), plus a return to Greece in summer 2020 after a five-year hiatus to this beautiful destination in the Mediterranean.

Thanks to you, our loyal guests, the awards just keep on coming. Highlights include:

What a year! And it’s sure to be another exciting one in 2020. Keep following along on the Disney Parks Blog to stay up to date on all of Disney Cruise Line’s upcoming adventures. Have a Happy New Year!