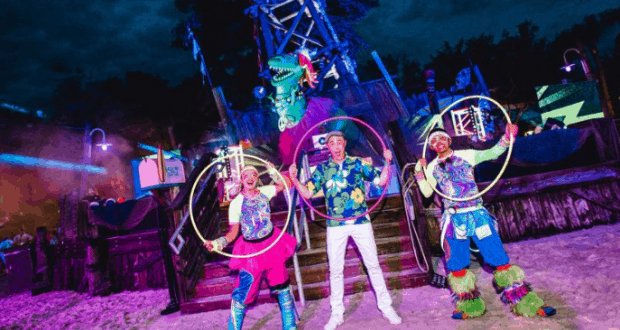 I have a love/hate relationship with all of the new events that Disney is offering.  Well, really it is my wallet that hates them and everything else loves them!  H2O Glow Nights at Disney’s Typhoon Lagoon Water Park is one of the many offerings that Walt Disney World has created (with an extra ticket price) with “exclusive” access to a park and special activities around it.  These VIP events mean lower crowds, and more opportunities to enjoy the attractions and entertainment with very little wait.  The H2O Glow Nights party celebrates Toy Story 4 with Partysaurus Rex as the star of the show (although he is a statue.  The event takes place at night, so everything is glowing, and it has a festive atmosphere—even the floats in the lazy river get “plussed” as they throw in novelty floats like Parrots, American Eagles, and Flamingos.  And, all of the slides are open with no lines.  Here are 8 things I think you’ll love about H2O Glow Nights at Typhoon Lagoon:

Because this is a celebration of Toy Story 4 you’ll find some of your favorite toys on hand in Typhoon Lagoon for photo ops and to play.  I say play because lines to meet them were pretty much non-existent so they took their time with each guest joking around.  Woody, Jessie, and Buzz are all available for anyone to meet.  And for Annual Passholders there is an exclusive Meet & Greet with Bo Peep!  There is also a great photo op with an inflatable Forky!!!

Over on the beach by the wave pool Partysaurus Rex commands the party headquarters with a fun DJ.  All through the party they were playing music for dancing, and playing some games.  It was a great spot so that you could also enjoy the music from the wave pool.  They had fun lighting and lots of black lights so everything was glowing.  Tip:  When you arrive at the park (and you can get there early with your Glow Night ticket) stake out some chairs close to where you see the DJ booth set up.  You’ll be able to enjoy all of the fun, and you’ll be in a convenient central location for all of the attractions.

While there isn’t a ton of it, the merchandise for the party was fun.  When you arrive you are given both a wristband to show you are part of the party, and a glow bracelet to get in on the fun.  I would recommend going by the Dollar Store or Target’s Dollar Spot to stock up on some glow sticks to enhance your experience.  I totally planned for this, I had them, but I left them in our room.  There are a few things to buy as well, the Tervis cup is always a favorite of mine.

I always enjoy floating along in the lazy river at Typhoon Lagoon.  But with the small crowd at H2O Glow Night it is so much better.  It is nearly empty and there is plenty of room, which is so nice compared to a busy day in the park.  They have lighting shining on the lazy river so it is a different experience than the day time.  But the best part are the floats.  As we were walking down the path between slides we saw Cast Members bringing out a line of floats to add to the river—they had Parrots, American Eagles, Flamingos, Penguins—so we just followed them over to Castaway Creek and hopped in so we could get one of the fun floats.  And there were plenty to go around.

That means it isn’t blazing hot, the walkways are not burning your feet, and you don’t have to worry about sun burn!  With two fair skinned red haired children I have stock in Coppertone, but it was so nice not to even have to worry about it for this H2O Glow Night visit. My 7 year old son said one of the best parts was not wearing sunscreen!

Wait, what lines?  There were not any.  We did ALL of the slides, most of them multiple times, and really didn’t wait in a single line.  We did all of the slides on Crush-N-Gusher (some more than once) and the only wait was really just hauling those rafts up the steps.  Miss Adventure Falls, walked right on.  Humunga Cowabunga—just climb the steps.  It was an awesome time to do all of Typhoon Lagoon.

I think the special treats Disney created for H2O Glow nights were what I was looking forward to the most!  They had some very imaginative main dishes, and some super fun snacks and drinks.  The Buzz Blaster and Galactic Lemonade were a couple of the drinks, there was a Western Beef Brisket dish, but my favorite was the Bathtub Party Sundae—which was plenty to share among the 5 members of my family.  It included vanilla ice cream, confetti cake, whipped cream, and was topped with sprinkles and a chocolate rubber ducks—they served it in a clear dish shaped like a bathtub with a glow cube inside to match the atmosphere.

H2O Glow Nights is truly a party!  The DJ and Partysaurus Rex are sort of the center of the party, but all around the park it is a fun & energetic scene.  There are special lighting and projections on the back wall of the Surf Pool.  The Characters and Photos Ops.  The fun floats in Castaway Creek.  The treats.  The put in a good amount of effort into make the whole party feel special.  All of it works together to make it a great event, and I felt well worth the extra admission price (which was comparable to a single day ticket to Typhoon Lagoon).  I would highly recommend giving H2O Glow nights a try!

Have you attended an H2O Glow Night party?  What did you love about it?