Those who enjoy visiting Disney World regularly, or even somewhat regularly, have it very good in the sense that Disney World is so big and has so much to offer. Not only are there four theme parks, but there are also two waterparks, golf courses, miniature golf courses, Disney Springs, and numerous resorts. Needless to say, there are a lot of amazing and wonderful things to do at Disney World, and the attractions are a big part of that. However, there are some pretty spectacular attractions at the Disney parks around the world. Here is a list of 7 attractions that are found at the parks outside of North America, that we wish they would bring to Walt Disney World.

7. Journey to the Center of the Earth

Inside Mt. Prometheus on Mysterious Island at Tokyo Disneysea, is an attraction based on the Jules Verne story of the same name, Journey to the Center of the Earth. The ride is often compared to that of Test Track, but the theming and concept is totally different, though the ride and movement style may be similar. This attraction takes guests to a fantasy-like world at the center of the earth where strange creatures live and crystals glow, but there is also a volatile volcano that ultimately sends guests on a thrilling adventure.

Walt Disney Studios Park at Disneyland Paris has what looks to be a very cute and fun rollercoaster, called Crush’s Coaster. Guests can hop on Crush’s shell (the ride vehicles are shaped like a turtle shell!) just like in Finding Nemo, and go on an adventure under the sea. This is a thrilling coaster that looks great for the whole family.

One of the most popular rides at Tokyo Disneyland is Monsters Inc. Ride and Go Seek, which is very different from the Monsters Inc. attraction in California Adventure. The attraction in Tokyo Disneyland isn’t just a retelling of the film, it’s an interactive attraction! Two guests are seated in the ride vehicle and each guest has a flashlight. These flashlights are used to search out and highlight the hidden monsters and Boo throughout the attraction. There are Monsters everywhere! This is a colorful ride filled with Boo’s laughter, and familiar monsters. This ride isn’t quite interactive in the same way Tory Story Mania is, but it looks just as fun and we would love to see it in Disney World!

Mystic Manor at Hong Kong Disneyland is sometimes compared to the Haunted Mansion attractions, but it is quite different. It is a dark ride, but is more fantasy and adventure based. It is less spooky than the Haunted Mansion attractions, plus Mystic Manor features a cute and loveable monkey, Albert. The story takes place in the private museum/manor of Lord Henry Mystic, who is an explorer and collector of artifacts, which due to the mystic powers of one of his more recent acquisitions, brings much of the art and relics to life. The attraction also features trackless ride vehicles, called the Mystic Magneto-Electric Carriage.

3. Pirates of the Caribbean Battle for the Sunken Treasure

The new Shanghai Disneyland Resort looks absolutely amazing. Being the newest of the theme parks everything has been designed with the most recent technology and the theming looks like the most comprehensive and immersive yet, and their Pirates of the Caribbean attraction embodies all of these elements. We wouldn’t want to replace the Pirates attraction that is at Magic Kingdom, but ideally we could visit both versions of the attraction at Disney World. The new Pirates in Shanghai looks unlike any other Pirates of the Caribbean out there, both in the story told and the technology used. The adventure brings guests down under the sea, and Captain Jack Sparrow plays a big role. If you don’t think you will visit Shanghai any time in the near future, I recommend watching a ride video on YouTube, because this attraction looks simply unreal!

This coaster in the Grizzly Gulch section at Hong Kong Disneyland looks like Big Thunder Mountain meets Expedition Everest, which means it looks amazing! The ride features Audio-Animatronic bears, dark sections, speed, thrills, and it even goes backwards for a section of the ride, just like Everest. But obviously, this ride is so much more than just Big Thunder Mountain and Everest, it tells its own story, it has its own characters and theming, and we would definitely ride it multiple times at Disney World!

In Tomorrowland at Shanghai Disneyland is the TRON – Lightcycle Power Run, and it is our number one pick for the attraction we would love to see come to Disney World. It just looks so cool! This coaster takes guests on a fast and thrilling ride through the high-tech world of TRON on Lightcyles! This attraction is the definition of ‘futuristic’ with its cool and sleek theming, and it’s ride through the Grid. The best news is that TRON is on it’s way to Walt Disney World’s Magic Kingdom. In a couple of years, we too will be able to climb about a Lightcycle for one amazing ride!

2016-08-05
Lauren Repei
Previous: Do You Know These 5 Secrets About Disney’s Hollywood Studios?
Next: 8 Facts and Secrets about Mickey’s Very Merry Christmas Party at Walt Disney World 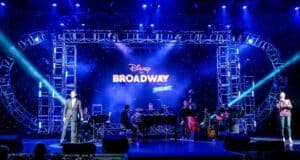