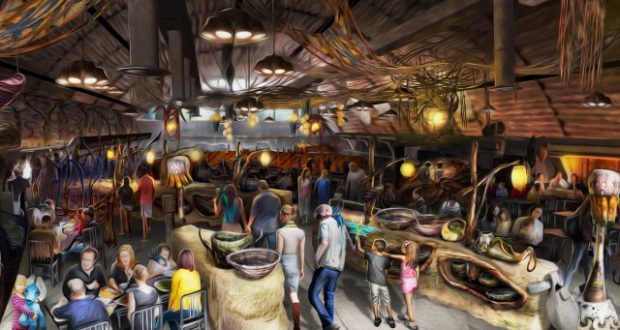 This is going to be an exciting year at Disney’s Animal Kingdom. The announcement of a new land based on the movie AVATAR was first made back in 2011. Originally a 2015 opening date was hinted at, but that obviously didn’t happen. The official opening information for Pandora – The World of AVATAR is now listed on the Walt Disney World website as “coming summer 2017”. There is a popular rumor that the new land is slated to open Memorial Day Weekend. The rumor stems from a Florida Resident ticket offer that has May 27 – June 9 blocked out, but only at Disney’s Animal Kingdom. It could be that those dates are off limits for the special ticket because of the opening of Pandora – The World of AVATAR, or maybe that is the new time frame for Rivers of Light. It could also mean nothing. We will know soon enough. Here are seven changes that should be coming to Disney’s Animal Kingdom in 2017. Hopefully the schedule won’t be pushed back.

The addition of characters to Pandora – The World of AVATAR at this point is pure speculation, nothing official has been announced by Disney. Still, it makes sense. Character meet and greets are held in most Walt Disney World lands, Pandora – The World of AVATAR shouldn’t be any different. Character photos will help generate a lot of free publicity for the new land, since guests will add them to their favorite social media websites. There could also be other meet and greets added throughout the park, to help keep traffic flowing evenly. Many Disney fans are always on the lookout for hard to find characters, so there is a possibility that some will be added at new locations outside of Pandora – The World of AVATAR so that the other lands will still get plenty of traffic. Time will tell how many characters are added, if any.

A new land needs a new merchandise location, and that is what is planned for Windtraders. According to Disney Parks Blog, the shop that will be located in Pandora – The World of AVATAR will feature “Na’vi cultural items, toys, science kits, and more”. Most likely the “and more” will include T-shirts, coffee mugs, and AVATAR-themed Mickey Ears.

If you’re thirsty while visiting Pandora – The World of AVATAR, it sounds like Pongu Pongu is going to be the place to stop! Not much has yet been released about the new location. According to Disney Parks Blog, “Pongu Pongu will be a special drink location with a design that is as eclectic as its Expat owner.” Details such as menu, seating, and whether or not the Disney Dining Plan will be accepted are not yet known.

A new land would not be complete without a place to eat. In Pandora – The World of AVATAR that place will be Satu’li Canteen. The restaurant will be indoors. Displayed will be “Na’vi art and cultural items”. No word has been released yet on whether it will be counter service, full service, or a combination like Be Our Guest Restaurant at Magic Kingdom. The menu is also still unknown.

Leaving Pandora – The World of AVATAR for a minute, another new addition at Disney’s Animal Kingdom for 2017 should be Rivers of Light. Nothing is listed on the Walt Disney World website about the show’s debut except for “Coming Soon!”. The nighttime show already has a checkered past. It was supposed to open in April, 2016, then was pulled from the schedule at almost the last minute. A replacement show, The Jungle Book: Alive With Magic, ran in its place for the summer season in 2016. Anticipation is high for Rivers of Light, the concept has been compared to the popular World of Color at Disneyland Resort. While there’s still no official word on when the nightly show will become part of Disney’s Animal Kingdom schedule, there have been rumors of after hours testing. It might not be long.

Pandora – The World of AVATAR will feature two new rides. The first is a family friendly boat ride called Na’vi River Journey. You’ll ride in a canoe down the Na’vi River and into the rainforest. You’ll pass creatures and plants from the movie along the way. The ride ends with an encounter with a Na’vi shaman and her music. There could be a dip or two along the way, similar to Pirates of the Caribbean. Na’vi River Journey is expected to be breathtaking in beauty for a ride.

The most anticipated new addition to Disney’s Animal Kingdom for 2017 is arguably AVATAR Flight of Passage. You will climb on a banshee and head out for the ride of your life. Disney Imagineers have said that ride-wise there are some similarities between AVATAR Flight of Passage and Soarin’ at Epcot. The height restriction has not yet been made known, but for comparison you need to be 40 inches or taller to ride Soarin’. AVATAR Flight of Passage is expected to be extremely popular, and rumors claim that there will be four theaters running at once to keep down the wait time.