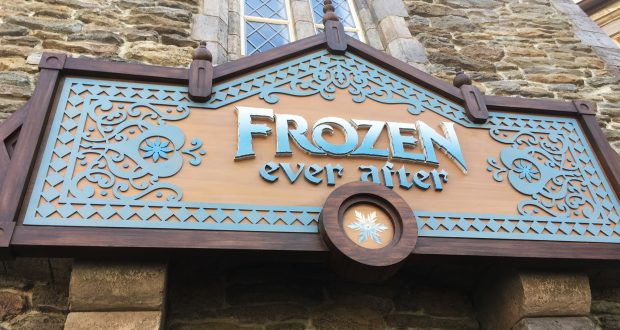 You’ll want to spend as little time as possible waiting in lines while at Walt Disney World, which is what FastPass+ is all about. With it, you can make up to three reservations per day in advance. If you’re staying on property you can make those reservations at the 60 day mark, if you’re not staying at a Walt Disney World Resort hotel you can make them 30 days ahead of time. After you’ve used your three selections, you can make a fourth on the My Disney Experience app or at a FastPass+ kiosk. At Epcot, FastPass+ is in tiers. You’re allowed to make one selection from Tier One and two from Tier Two. This means that you’ll have a difficult decision to make, since the most popular attractions are all Tier One. Here are six of the top FastPass+ selections at Epcot.

If you love Mickey and other characters, you might want to consider using one of your Tier Two FastPass+ selections for Epcot Character Spot. Characters do change from time to time, but this is currently the place where you can meet Mickey, Minnie, and Goofy. Epcot Character Spot is also sometimes home to a character or two that you can’t find elsewhere. You’ll wait in several lines, but the wait is indoors so you won’t be sweaty in your pictures.

If you’re hitting Epcot during one of the more crowded times of year, you might want to consider making a FastPass+ reservation to head inside the park’s icon. The lines used to be short most times of the year, but recently that’s changed. During peak times it isn’t unusual for the Wait Time to hit 45 minutes or more. Inside Spaceship Earth you’ll travel back in time through the history of communications, and you might get a glimpse of your future as well.

Have you ever dreamed of traveling to Mars? With Mission: SPACE you’ll have the opportunity to do just that. You’ll be part of the crew that heads to the Red Planet. The ride is intense, so much so that there are two experiences available. Mission: SPACE is a great use for a Tier Two FastPass+, especially if you plan to join the more intense Orange Team.

If you’ve ever wanted to design a concept car and then drive it, this ride could be for you! Test Track doesn’t have any hills or dips, but it’s still a thrill. In the first part of the ride you’ll test a car, and see how your design compares. The end of the ride offers the best kick, you’ll hit the open road at 65 MPH. Test Track is a Tier One selection. If you can’t get a reservation, hit it first thing in the morning, or consider using the Single Rider line.

In 2016 Soarin’ was updated, and the results are incredible! You will now soar around the world instead of just over California. The new film is crisp and clean, and the music expands upon the classic original score. The ride capacity for Soarin’ was expanded with the refurbishment, but the line can still grow long. It is a Tier One Attraction so grab a FastPass+ for this one as soon as you can.

Frozen Ever After opened in June, 2016, and the ride was an instant hit. Fans of Frozen are still willing to wait hours to be able to ride a boat through the film. If this is a must-do, you’ll want to make your FastPass+ reservation the moment you are able. There is a very good chance that all selections will be gone by the end of the day. If you don’t snag a reservation, keep checking because someone might cancel. If you have a reservation but aren’t going to use it, please let it go (pun intended) by canceling it so that somebody else will have the opportunity to ride. This Tier One attraction is arguably the hardest to make FastPass+ reservation at Walt Disney World.