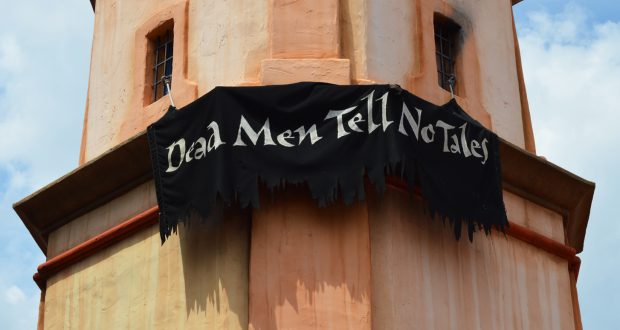 Since Walt Disney World is such an amazing and magical place to vacation, guests are sure to come away with plenty of memories of their experiences. These memories can include favorite attractions, certain smells like popcorn on Main Street, perfect photos in beautiful locations, delicious meals, and much more. While many guests find that they remember attractions in Walt Disney World, there are certain ones which are all the more iconic and memorable thanks to perfect one-liners which sum up the experience that guests will have. Whether these lines build suspense, kick off an adventure, or reference bits of history, they are remembered by many guests thanks to their catchy and memorable existence. No guest can visit Walt Disney World and leave without remembering these classic lines! Here are the nine Walt Disney World one-liners to hear on every Disney vacation!

Many guests head directly to the Magic Kingdom when they arrive in Walt Disney World as it is one of the most beloved of the theme parks found there. When passing through the main gates of the park onto Main Street, guests pass underneath the Walt Disney World Railroad Station and are greeted by the whistle of a steam train and the iconic sound of the conductor calling out “all aboard!” This sound is a welcome to the park for many guests and is definitely a memorable Disney one-liner.

8. The Backside of Water!

The world famous Jungle Cruise can be found in the Magic Kingdom’s Adventureland and brings guests on an exotic journey down the rivers of the world. While there are plenty of beautiful sights along the way, the most memorable is the backside of water which is announced in a theatrical and reverent way by the hilarious skippers.

Perhaps no attraction in Walt Disney World is as beloved as the Haunted Mansion in the Magic Kingdom’s Liberty Square. The attraction brings guests into a stately manor house which is home to nine hundred and ninety nine happy haunts who cause all sorts of eerie occurrences. The Haunted Mansion is narrated by the disembodied Ghost Host who can first be heard as guests enter into the foyer of the mansion where a portrait of a gentleman ages from a young man to skeletal remains. There the Ghost Host welcomes guests with the iconic line “welcome, foolish mortals.”

6. This Here’s the Wildest Ride in the Wilderness!

Big Thunder Mountain Railroad in the Magic Kingdom’s Frontierland whips guests through the mining town of Tumbleweed where they can enjoy eerie caves, a rustic town, and plenty of wildlife. Before embarking on their journey, guests are warned by a townsperson of the daring adventure to come as he yells out that “this here is the wildest ride in the wilderness!”

Peter Pan’s Flight is one of the most classic and beloved attractions in all of Walt Disney World and it can be found in the Magic Kingdom’s Fantasyland. The attraction sprinkles guests with pixie dust and has them take to the skies to soar high over London and Neverland with Peter and the Darling children. After guests board their magical pirate ships, they suddenly take to the sky as Peter calls out “here we go!”

Epcot is home to several popular attractions including the wonderful Soarin’ Around the World. The attraction invites guests on an unforgettable hang gliding experience over some of the most iconic locations in the world including the Great Wall of China and the Sydney Opera House. After being seated in the loading area of the attraction, guests suddenly experience a rush of anticipation as the lights dim and they hear the preshow host utter “Soarin’ to tower, we are go for takeoff.”

Another iconic attraction in Epcot is Spaceship Earth which brings guests on a journey from the beginning of time to modern day to celebrate the history of communication. The experience is narrated by Dame Judi Dench who combines humor and information to educate guests about communication in an entertaining way. While passing through one scene, Dench explains that the Phoenicians were the first people to create a common alphabet to make communication between different groups possible. Dench memorably reminds guests that they should “thank the Phoenicians” if they know their ABCs.

There is no Walt Disney World one-liner as memorable and iconic as the safety spiel recited on the monorail. Guests who enjoy a ride on the monorail around Seven Seas Lagoon or to Epcot from the Ticket and Transportation Center can listen to a wonderful narration which describes the locations which they are passing. At each stop along the way, the narrator reminds guests to stand clear of the closing doors before repeating the warning in Spanish. Por favor mantengase alejado de las puertas!

2016-06-26
Caitlin Kane
Previous: Do You Know These 6 Secrets About Disney’s Wilderness Lodge?
Next: Would You Rather?: Epcot Edition

You Can Win A Cosmic Rewind Disney Vacation! Here’s How!